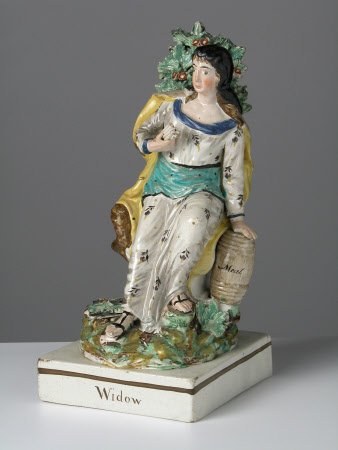 Figure, lead-glazed earthenware painted with enamel colours, The Widow of Zarephath, Staffordshire, circa 1790 - 1810. A woman seated beside a tree with a bundle of sticks in her right hand and her left resting on a barrel inscribed 'Meal', with a jug inscribed 'Oil' at her left side. On a square base inscribed 'Widow'. Unmarked. The biblical story (1 Kings 17:7-16) tells of the encounter between prophet Elijah and a widow and her son gathering sticks when he arrives at the town of Zarephath. Elijah asks her for a piece of bread, and the destitute widow invites him to her home where she uses her last bit of flour and oil to bake for him. The prophet then blesses the woman and her child, and assures them that their supplies of flour and oil will never be diminished. Shortly thereafter the son dies, but because of Elijah’s fervent prayers, God returned the boy to life. The story was often interpreted as an Old Testament prefiguration of the passion and sacrifice of Christ.

Bequeathed to the National Trust along with Stourhead House, its grounds, and the rest of the contents by Sir Henry Hugh Arthur Hoare, 6th Bt (1865 – 1947) in 1946.