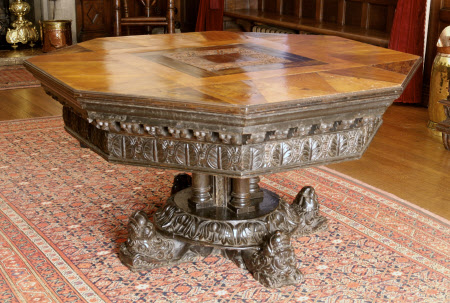 An unusual octagonal centre table, English, constructed in the 19th century using 16th and 17th century elements. The top originally from Wells Cathedral and formerly the sounding board from the nave pulpit. The top mostly of oak in a variety of cuts with some fruitwood, the central square having a carved anthemion border framed by wider borders and surrounded by an outer framework of dog tooth design, above a carved and ebonised frieze of interlocking foliate rosette pattern below large stylised dentil mouldings, raised on columnar supports with circular foliate-carved platform base and four projecting feet beautifully carved as recumbent lions, their heads turned upwards .

This is an extraordinary and intriguing table. The form of the table would suggest it was made in the 19th century, using a variety of earlier architectural fragments. The carved frieze sections with leafy roundel decoration in a repeating pattern are 17th century, the columns which support the table top are 17th or 16th century. The lion feet are 16th century and beautifully carved. They, together with the socle plinth resting on their backs, could possibly be the base of an early lectern. Unfortunately, nothing is known of its history, although Wells Cathedral have confirmed that the sounding board was indeed once part of the nave pulpit.