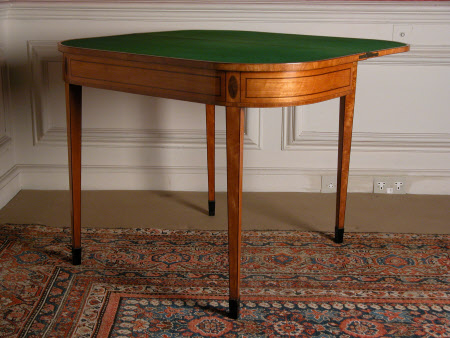 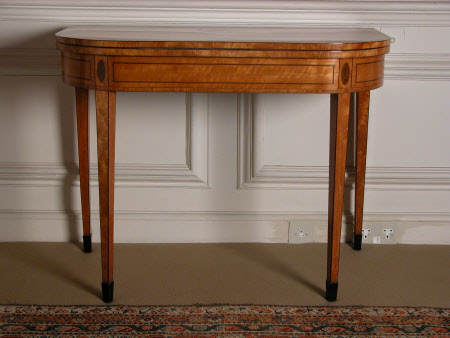 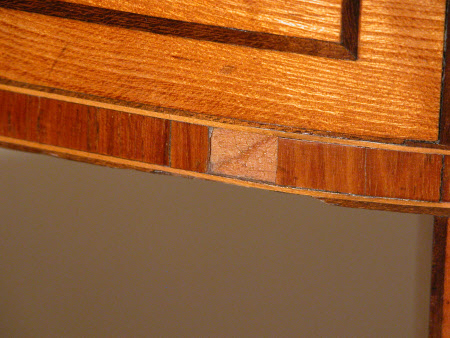 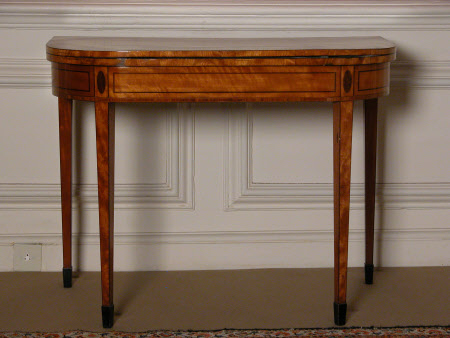 A pair of satinwood and tulipwood cross banded card tables, English, circa 1785. The hinged top with a baize lined playing surface raised on square section tapered legs and spade feet. Bearing a hand written label to the underside of one table: 'This pair of tables belonged to Mr. Fauntleroy the last man to be hanged for fergery, RF Lambe' The tables are said to have once belonged to Henry Fauntleroy (12 October 1784 – 30 November 1824) who was an English banker and forger. After seven years as a clerk in the London bank of Marsh, Sibbald & Co., of which his father was one of the founders, he was taken into partnership, and the whole business of the firm was left in his hands. In 1824, the bank suspended payment. Fauntleroy was arrested on the charge of appropriating trust funds by forging the trustees' signatures, and was committed for trial, it being freely rumoured that he had appropriated £250,000, which he had squandered in debauchery.He was tried at the Old Bailey, and, the case against him having been proved, he admitted his guilt, but pleaded that he had used the misappropriated funds to pay his firm's debts. He was found guilty and sentenced to be hanged. Seventeen merchants and bankers gave evidence as to his general integrity at the trial. After his conviction, powerful influence was brought to bear on his behalf, and his case was twice argued before judges on points of law. An Italian named Angelini even offered to take Fauntleroy's place on the scaffold. The efforts of his many friends were, however, unavailing, and he was hanged in November 1824, one of the last few to be executed for forgery before it ceased to be a capital crime in 1836