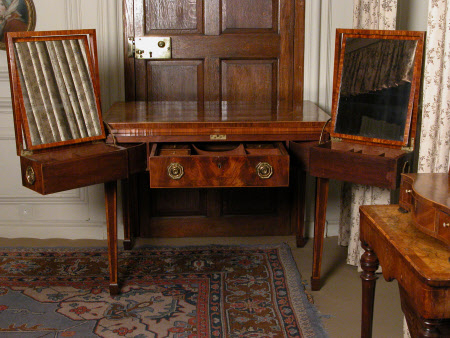 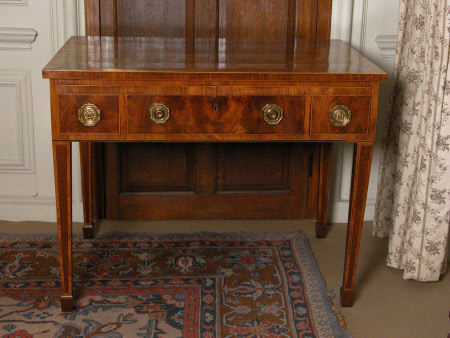 This unusual piece of furniture is known as a Rudd's toilet table, it was probably named for the infamous 18th century courtesan Margaret Caroline Rudd. It was designed by George Hepplewhite and appears in 'The Cabinet-maker and Upholsterer's Guide' published by his widow in 1788.

A tulipwood cross banded and holly inlaid mahogany dressing table or 'Rudd's table' after a design by George Hepplewhite (d.1786), London, circa 1775. The rectangular top with an oval banded inlay above three drawers to the frieze, each fitted with compartments, the central drawer with a baize lined slide, the hinged flanking drawers fitted with retractable fully adjustable mirrors which fold flat over the central drawer to create a flat surface, raised on square section tapered legs and spade feet.

This dressing table design is illustrated in George Hepplewhite’s “The Cabinetmaker and Upholsterers Guide” and described as 'Rudd's table' . Thomas Shearer also published his version of the design in the “Cabinet-Makers’ London Book of Prices” and also described as “Rudd’s Table”. The name appears to be associated with Margaret Caroline Rudd (d.1779), an infamous forger and fraudster. Her 'victims' included the twins, Daniel and Robert Perreau who stood trial with her for forgery and were found guilty and hanged in 1775, Rudd was acquitted. Little is known about George Hepplewhite, his widow, Alice, published a book of his designs for furniture two years after his death in 1786. “The Cabinetmaker and Upholsterers Guide”, plate 79 illustrates “Rudd’s Table” and in the note he writes: “Rudd’s Table or Reflecting Dressing Table, This is the most complete dressing table made, possessing every convenience which can be wanted, or mechanism and ingenuity supply. It derives its name from a once popular character, for whom it is reported it was first invented.” The legs in Hepplewhite's drawing are fluted as opposed to cross banded as with this example but the design and form are otherwise near identical. James Weedon (April 2018)