Apollo in his Chariot preceded by Aurora (after Reni) 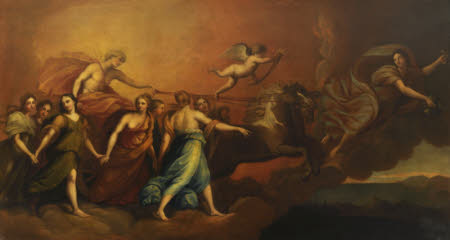 Oil painting on canvas, Apollo in his Chariot preceded by Aurora (after Reni), after Guido Reni (Bologna 1575 – Bologna 1642). Apollo (Helios), surrounded by maidens (Hours/Nymphs) against a golden backdrop, accompanined by Phosphorus (morning star) holding a torch, drives his sister, Diana (Selene) into the darkness OR preceded by Aurora (Dawn). A copy of the famous 'Aurora' freco of 1613 - 1614 in the Palazzo Pallavicini-Rospigliosi, Rome.

Acquired some time between 1842 and Chaloner Chute's Notes, 1880s and again after 1888 this was the overmantel in the Chapel Parlour (see Martha Chute's watercolour of the Chapel Parlour); bequeathed with The Vyne, estate and contents by Sir Charles Chute, 1st Bt (1879-1956)