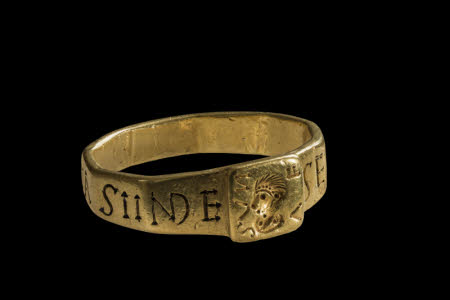 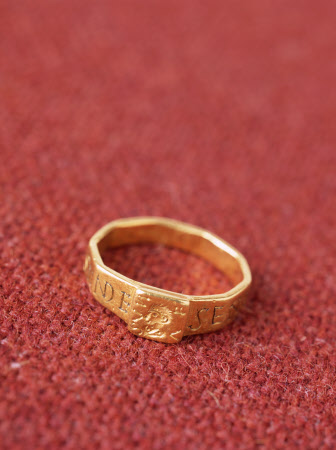 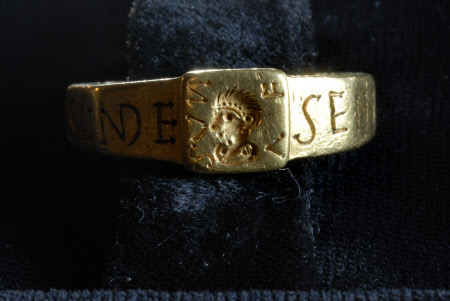 Sometime in the 5th century, near the edge of the Roman town of Silchester (ruins north of Basingstoke, Hampshire), someone lost a valuable gold ring. The ring lay buried in the ground until 1785, when a farmer ploughing his field, perhaps catching a glint from the precious metal, recovered it and no doubt pondered upon its story. The size suggests it was made for a man’s finger, and its multiple inscriptions can be linked to both the Roman religion and early Christianity, including the words ‘Venus’ (Roman goddess of love and victory) and ‘Senicianus live in God’. At this time, pagan religions and Christianity existed side by side. Did the original owner use the ring to mark a conversion, or was he perhaps attempting to practise two faiths? The ring was later acquired by the Chute family, who owned The Vyne, a Tudor mansion nearby. In the past it has been wrongly identified as the inspiration for J.R.R. Tolkien’s Lord of the Rings trilogy.

Gold ring with a faceted ten-sided hoop attached to a square bezel probably intended to be used as a signet ring. The bezel has an engraved profile bust facing left surrounded by a Latin inscription which in impression reads VENVS. There is a second inscription on the hoop; Seniciane vivas [i]n De(o). Late Roman, c.350-450AD.

Discovered at Silchester in North Hampshire around 1785, this gold ring is an important example of late Romano-British craftsmanship, which has fascinated researchers since the 1880s. The ring is made from gold and consists of a 10-sided faceted hoop with a square bezel attached to it. Both the hoop and the bezel have individual Latin inscriptions carved on them. The hoop's inscription reads Seniciane vivas [i]n De(o), which translates into English as 'Senicianus live in God'. The bezel has an engraved profile bust facing left which is surrounded by a Latin inscription which in impression reads VENVS or 'Venus'. The characteristics of the bezel suggest that it was intended to be used as a signet ring. The two inscriptions appear to be somewhat contradictory, with the bezel implying a devotion to the Roman goddess Venus, while the phrase on the hoop is normally associated with early British Christians. Around 1785, the ring was discovered by a farmer while ploughing near the ruins of the Roman city of Calleva Atrebatum near Silchester in Hampshire, around 4 miles north of The Vyne. It was shown at the Society of Antiquaries in London on 12 January 1786 by Lord Arden, but then disappeared only to re-emerge in the collection of the Chute family at The Vyne in the 1880s. This re-discovery coincided with the discovery of a lead plaque related to the Temple of Nodens at the Romano-British site at Lydney Park in Gloucestershire. Nodens was a Celtic god associated with healing, and the Lydney site was a major place of worship and pilgrimage. The Lydney tablet reads: Deuo Nodenti Siluianus anilam perdedit demediam partem donauit Nodenti inter quibus nomen Seniciani nollis petmittas sanita tem donec perfera[t] usque templum [No] dentis Which in English reads: 'To the god Nodens Silvianus has lost his ring and given half (its value) to Nodens. Among those who are called Senicianus do not allow health until he brings it back to the temple of Nodens'. The main temple building at Lydney has been interpreted as containing a large dormitory for sick pilgrims and it is possible that the ring was stolen while the owner slept there. Soon after the plaque's discovery was announced, it was connected by antiquaries to the ring at The Vyne. Exactly how the ring had made it into the Chute family's collection is unknown. The discovery of the plaque and its suggested link to The Vyne fascinated Chaloner Wiggett Chute (1838-1892) the then owner of the house who was in the process of writing his book The History of The Vyne and he arranged for both the ring and the plaque to be drawn to be included in its publication. It seems likely that the plaster copy of the plaque, NT 719790 entered The Vyne's collection at this time too. Even in the 1880s there was no agreement on the link between the ring and the plaque and this continued into the 20th-Century with Chaloner's son Sir Charles corresponding with the Cambridge academic Jocelyn Toynbee over it. If it is the same ring the as the one referenced on the plaque then it is difficult to explain why it has Senicianus' name on it rather than Silvanus', although suggestions have been made that it was made to protect him from the curse. Ultimately, it seems unlikely the plaque and its curese, and the ring are linked. This in part is due to the distance between Lydney and Silchester, but also the fact that it was discovered near a major contemporary settlement where it quite possibly could have been made. Even without the link, the ring is still of considerable importance for understanding late Roman Britain and its shifting sands of power and religious adherence. Probably made in the early 5th Century AD, and quite possibly at Calleva Atrebatum where it was found, its iconography and inscriptions reflect an owner who was living in this rapidly changing period of time, where Roman power was beginning to wane over its British province. When considering the bezel (Corby Finney, 1994, p.183), Corby Finney regarded its iconography as potentially unique within surviving known examples from anywhere in the Roman world. The face on the bezel is exaggerated and almost looks half-human, half-animal, making it appear primitive and dramatic. While it is not clear what it is meant to be or represent, it is not a recognisable image of the Roman goddess Venus. The inscription on the band also has similar curious issues, with it missing off the final dative 'O' for the word 'Deo'. This could simply be an engravers error, or reflect that the bezel is a later addition to the band, and when it was attached it simply covered the letter up. Whatever the case here, the inscription can be linked to several other examples of rings from Roman Britiain which were worn by Christians displaying their faith. What then was the owner trying to show with this ring? Perhaps he was trying to protect himself form a curse for stealing this very ring, but more likely he was a convert to Christianity who was re-purposing his ring to display his new faith. Or perhaps, as Toynbee (1968, p.190) has argued he was a Christian who equated his faith with love, and therefore included Venus, the goddess of love, as an appropriate symbol of his religion.

Discovered at, or near Silchester c.1785 and at The Vyne before 1880. Bequeathed to the National Trust along with the contents of The Vyne by Sir Charles Chute, Bt in 1956.