Tapestry ‘after the Indian Manner’ 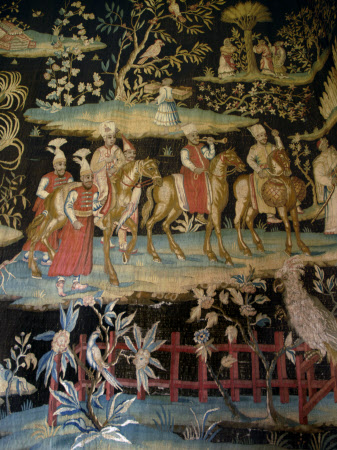 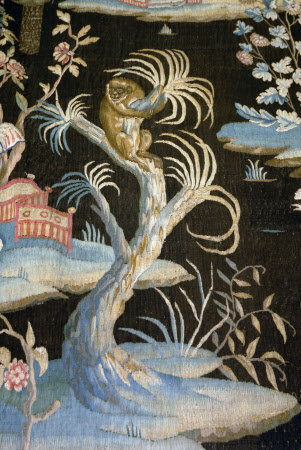 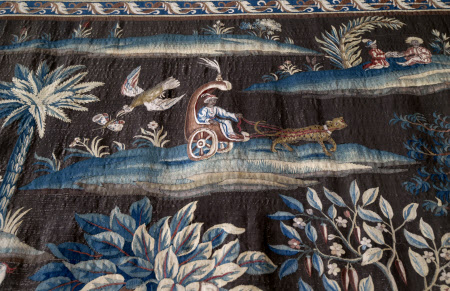 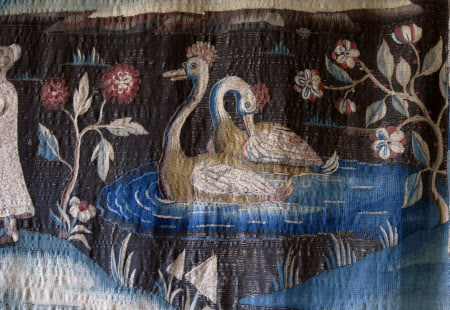 Made of wool and silk, these tapestries were made at the Soho factory, London, under the direction of John Vanderbank, the leading tapestry weaver of his day.

Tapestry, wool and silk, 6-7 warps per cm, one of five Tapestries ‘after the Indian Manner’, London, c. 1700-1720. A tapestry with a number of small, colourful scenes and figure groups arranged on a dark brown ground. These include a large pagoda on the left, and a god with four arms and the tail of a fish being worshipped on the right. Down the left hand side a strip has been sewn onto the tapestry from elsewhere within the set. Near the centre there is a sewn-up vertical cut running halfway up the tapestry from the bottom. The tapestry has narrow borders at the top and bottom composed of a row of curling acanthus leaves on a light blue ground. The borders have been sewn onto the main field and some were originally side borders.

The six Tapestries ‘after the Indian Manner’ at The Vyne have been significantly altered to fit into their current positions in the Tapestry Room, and may once have comprised a set of less only four panels. Each tapestry is made up of a series of lively and exotic small figure groups arranged on a plain brown ground, and the overall effect is clearly intended to imitate the Japanese and Chinese lacquer panels that were imported into Europe in increasingly large quantities from the late seventeenth century. Western artists and craftsmen also began imitating the forms and decoration of imported wares. The taste for such goods was eclectic. Images of diverse origin were often combined at will, and the terms 'Chinese', 'Japanese' and 'Indian' were used fairly indiscriminately to describe images and objects of oriental inspiration. Although their designs derive from Japanese, Indian and even Turkish sources, tapestries like those at The Vyne were often referred to ‘after the Indian Manner’. The term ‘Chinoiserie’, used today to describe goods made in this broad style, only became widespread in the late nineteenth century (Mitchell 2007, p. 11). The first recorded set of tapestries of this type was made by John Vanderbank (fl. 1683-d. 1717), the Yeoman Arrasworker, for Queen Mary’s apartments at Kensington Palace in 1690. These were described at the time as ‘tapestries after the Indian Manner’. This set is now lost but another with the same designs, made the following year, survives in the National Trust’s collection at Belton House (436999.1, 2). As Edith Standen has noted (Standen 1980, pp. 134-138), the majority of the figures in these tapestries derive from the illustrations to the English edition of Arnold Montanus's 'Atlas Japannensis', first published in Amsterdam in 1669 and published in English the following year by John Ogilby. Vanderbank later produced a second series with similar designs but smaller, less elaborate figure groups – possibly conceived as a cheaper option to capitalise on the popularity of the earlier series. The second series used a more diverse range of design sources, and Standen has traced many of the figures to Indian, Persian and even Turkish sources. Examples of the second series are far more numerous than the first (Standen 1980). The tapestries at The Vyne are unusual in that they combine figures from Vanderbank’s earlier, ‘Japanese’ and the later ‘Indian’ series. Nos. 719616.1 and 719616.6 include figures taken from the ‘Japanese’ series – the four-armed god, the figure with an umbrella carried by an attendant. Others in the set replicate entire compositions from the ‘Indian’ series, which have been given names by Standen and earlier scholars: nos. 719616.3 and 719616.5 must originally have been part of a single piece, making up a composition known as ‘The Harpist’, and no. 719616.4 repeats a scene known as ‘The Concert’. All the figures are in reverse and somewhat altered, indicating that the designs have been copied from existing tapestries and not woven from Vanderbank’s original cartoons. Another tapestry with a design copied in reverse after Vanderbank’s ‘Indian’ series is in the Toms Collection, Lausanne, and is part of a set formerly belonging to the Lesley Melville family; two further tapestries from the Melville set, also reverse copies after Vanderbank’s ‘Indian’ series, are now in the Beit Collection, Russborough, Ireland. The tapestries were supplied to the 1st Earl of Melville by Leonard Chabenix in 1700. Leonard Chabenix came to London from the tapestry-producing town of Aubusson in 1696, but it is not known whether he wove the Melville tapestries or was just a dealer (Hefford 2010, pp. 253, 262-66). Like the Melville tapestries, the set at The Vyne was probably woven at a small workshop in London, copying the popular weavings produced by the Yeoman Arrasworker John Vanderbank. Many such workshops existed in the early years of the eighteenth century as Huguenot weavers came to London in large numbers from France (See Hefford 1984). The tapestries were probably commissioned by Edward Chute (1658-1722). They are recorded in the North Bedroom at The Vyne in the 1754 inventory (Howard 1998, p. 12), and were moved to their present position in the Tapestry Room by Wiggett Chute between 1842 and 1879. This move involved significant alterations to the tapestries which have been cut up and sewn back together to fill the wall spaces of the room, with borders removed and re-applied on the upper and lower edges only. Wiggett also installed the ‘Metamorphoses’ tapestries in the neighbouring Little Tapestry Room, again significantly altering the set to fit the space (no. 719696). Wiggett himself records that he “brought all the tapestry together, which is, I believe, of Gobelin manufactory, partly from the North bedroom, and part from the present Library, and arranged it as at present in the Billiard Room and Anteroom, and brought the woodwork of the ceiling, then painted white, from the schoolroom.” Wiggett used the tapestry room as a Billiard Room, but from c. 1880 it was referred to as the Tapestry Room (O’Brien 1995). The set has remained in place ever since. (Helen Wyld, 2013)

Probably commissioned by Edward Chute (1658-1722) and recorded in the North Bedroom at The Vyne in the 1754 inventory. Moved to their present position in the Tapestry Room by Wiggett Chute between 1842 and 1879. Transferred to The National Trust with The Vyne House and Estate in 1956.