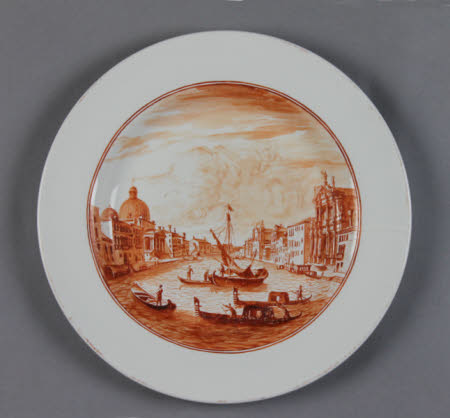 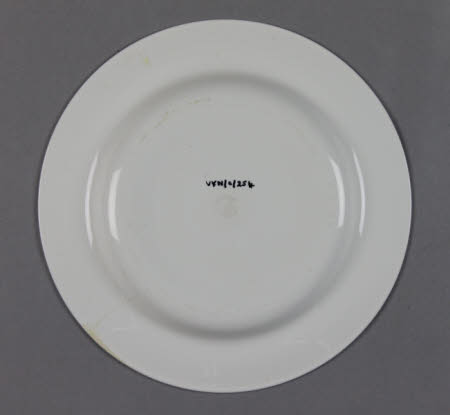 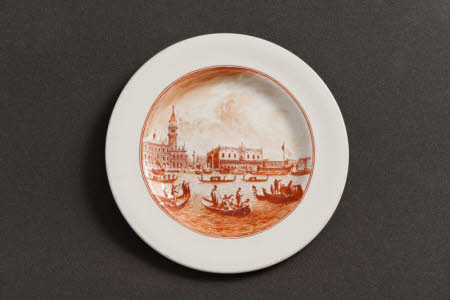 Unlike many modern holiday souvenirs, this milky white glass plate (one of 16) would have deeply impressed British admirers in the mid- to-late 1700s. The plates were commissioned from a glasshouse on the island of Murano near Venice in June 1741 by John Chute (1701–76), the owner of The Vyne in Hampshire. The prestige of these high-end souvenirs, ordered while on a grand tour, lay in both the material and the designs. The white glass was probably intended to imitate porcelain imported from China during this period. The painted red-enamel scenes, which include views of the Grand Canal and St Mark’s Square, come from designs by Antonio Visentini (1688–1782) and Luca Carlevaris (1663–1730), evidently influenced by the style of Antonio Canaletto (1697–1768). Such scenes helped to popularise the status of Venice as an iconic travel destination at this period.

Plate, one of set of 16 (NT 718641-718656). Opaque-white glass painted in iron-red enamel with a view of the Grand Canal, Venice, showing the Church of the Displaced Carmelites and the church of San Simeone Minore (from the engraving by Antonio Visentini (No.XI) in the series Prospectus Magni Canalis Venetiani (1735-1742) after Canaletto).

John Chute (1701-1776) accompanied his cousin Francis Whithead (1719-1751) on a Grand Tour between 1740 and 1746. It was while in Italy that John met Horace Walpole (1717-1797) and they remained close friends until his death in 1776. Chute became an important member of the Strawberry Committee and designed several parts of Walpole’s home, Strawberry Hill. Walpole and Chute were both staying in Venice in June 1741 when they visited the famous glassworks on the island of Murano. Along with another traveller, Henry Pelham-Clinton (1720-1794), later the 9th Earl of Lincoln, they each commissioned a set of lattimo plates, made by the Miotti Glasshouse. Lattimo was a technique which added a substance such as tin oxide to the glass to give it an opaque-white finish and had been developed in the late-15th century in an attempt to imitate imports of Chinese porcelain. Its milk-like appearance gave rise to the name lattimo, based on latte, the Italian word for milk. Each plate is decorated with a hand-painted view of Venice, mainly focussing on the Grand Canal and St Mark’s Square. A total of 24 images have been identified, with the views being copied from engravings made by the Venetian artists Antonio Visentini (1688-1782) and Luca Carlevaris (1663-1730). Visentini’s engravings, many based on views made by Canaletto (1697-1768) were published as Prosepectus Magni Canalis Venetiani in 3 volumes between 1735 and 1742. It is believed that Walpole, Chute and Pelham-Clinton were able to gain access to the engravings from the then unpublished third volume through the assistance of ‘Consul’ Joseph Smith (c.1682-1770), a well-known patron of the arts and agent for Grand Tourists to Venice. Visentini’s engravings were supplemented by further views from Carlevaris’ Le Fabrice, e Veduti di Venetia which had been published in 1703. The views were faithfully copied by the painters at the Miotti Glasshouse, although where necessary were adapted for the plates, often by moving boats in the foreground. It is not clear if all of the men ordered the same number of plates. Walpole owned a total of 24, as did Pelham-Clinton, but these sets have now been dispersed, with examples in museums in the UK, Europe and North America. Chute’s set of plates was first recorded at The Vyne in 1780, with the number of 16 recorded in August 1842. Charleston (1959) assumed that Chute had also originally owned a total of 24 and that some were damaged or sold. This is possible; however, Chute’s set curiously contains two copies of the Visentini view Ingressus in Canelem Regium, Canaletto which suggests that his set was always different to those owned by Walpole and Pelham-Clinton. Chute was considerably less well-off than his contemporaries, and it may simply be that he was unable to afford the full set and even accepted a double to keep his costs down. Regardless of the original number, the survival of this set is an important example of the luxury items acquired by British Grand Tourists and the taste of John Chute, as well as a reflection of his close friendship with Walpole. This particular example is Plate XI in Volume 1 of Visentini’s Prosepectus Magni Canalis Venetiani and was titled Hinc ex F. F. Discalceatorum Templo illinc ex S.Simeone Minore usque ad Fullonium which portays a view looking west down the Grand Canal showing the churches of San Simeone Piccolo and the Scalzi. Charleston (1959) was able to identify that this example has survived from all three of the original sets which were produced. Canelloto's original painting from which Visentini's engraving was copied from is in the Royal Collection (RCIN 407267).