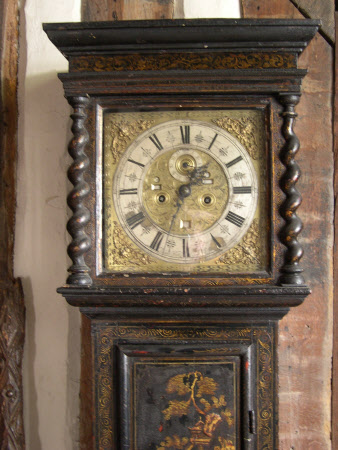 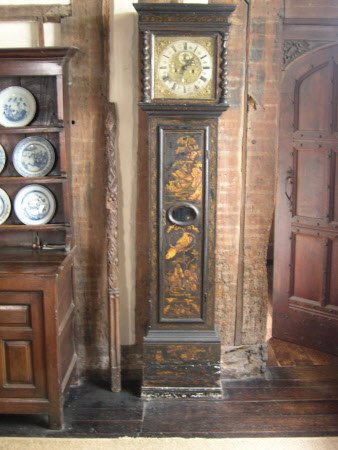 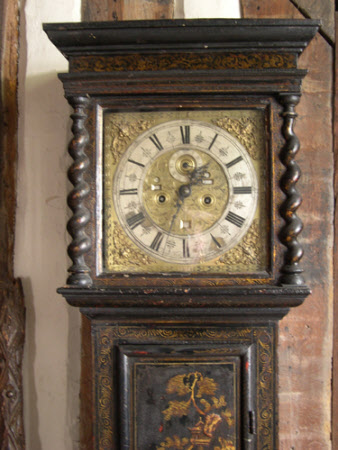 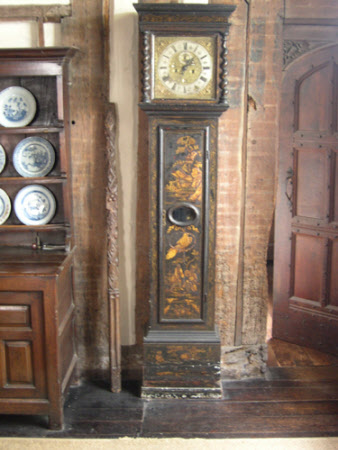 Eight-day long case clock in a blue-black japanned case, by William Huttly of Coggeshall, c.1700. Two-train, four-pillar movement with anchor escapement and internal count-wheel hour striking on a bell. There are several large holes in the movement plates and scribed lines on the periphery of the backplate, which seem to be a part of the original construction of the clock. 12” square brass dial with wheatear border and cherub & scroll spandrels. Silvered-brass chapter ring with roman numerals, arabic five-minute figures and scrolling decorative half-hour markers. The extensively engraved dial centre has a silvered brass seconds dial and ringed winding holes, as well as apertures for month with number of days (upper left), day of the week with sign of the associated deity (upper right) and day of the month in the square aperture above VI on the dial. Signed “Thomas Huttly Coggeshall fecit” on the chapter ring at VI. Pierced blued steel hands. The relatively crude, locally-made case, of (?) fruitwood, japanned in blue-black with raised chinoiserie decoration, has a rectangular, flat-top hood with twisted columns to sides. The construction of the case is notably atypical and indicative of a locally made product, especially around the area supporting the movement and dial. The rectangular trunk door is japanned with raised gilt birds and flowers and figures, and an oval pendulum lenticle. Rectangular japanned base with low skirting. The pendulum lenticle in the door was apparently placed in the wrong position originally and was moved several inches higher up during construction of the case. Note: The fly and the escapement are later, 19th century replacements.