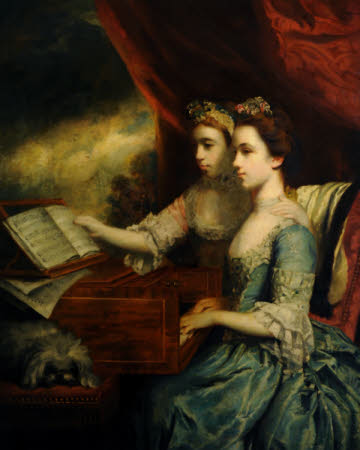 Oil painting on canvas, The Misses Paine (after Reynolds) by Fred Spencer (fl. 1900-1929), after Sir Joshua Reynolds PRA (Plympton 1723 - London 1792). Charlotte Beaumont, Mrs James Paine (d.1766) and her daughters Charlotte Paine, later Mrs St John Charlton (b.1751) and Mary 'Polly' Paine, later Mrs Tilly Kettle (1753-1798). Mrs Paine was an ancestor of Dora Maria Beaumont who married James Worsley Pennyman in 1882. A copy after the original Reynolds of 1765 in Lady Lever Art Gallery, Liverpool, purchased by William Hesketh Lever in 1918, which was a pendant to a double portrait completed by Reynolds the previous year, and now in the Ashmolean, Oxford, showing James Paine and his son of the same name, also an architect, and sculptor, in his own right. The original was sold by Dora Maria’s father to a London dealer in 1906 when the present copy was made.The dealer had difficulty selling it and had Mrs Paine painted out hoping this would make it more saleable. A group portrait of the two Miss Paines wearing pale blue and pink dresses, seated at a harpsichord with dog on a stool in the left foreground. Open music score on harpsichord. Red curtain background on right with view through window into cloudy skies on left. Copied by F. Spencer for Henry Frederick Beaumont (1833 - 1913), 23rd Lord of the Manor of Whitley Beaumont, Dora's father, when he sold the original privately to Charles Davis in 1906. In 1929 Spencer was asked to paint out Mrs Paine, as had been done in the original. In 1935, the hidden sitter was revealed in the original. The sheet music in the original painting is a Scottish song by Alan Ramsey, set to an air by Michael Arne (1740/1 - 1786): Oh Sawny why leaves thou thy Nelly to mourn, Thy presence could ease me, When naithing could please me, Now, Dowie, I sigh on the banks of the burn, Or thro’ the wood laddie until thou return. Tho’ woods now are bonny, & mornings are clear, While lav’rocks are singing, And primroses springing; Yet nane of them pleases my eyne or my ear, When thro’ the wood, laddie, ye dinna appear. That I am forsaken some spare na to tell, I’m fashed with their scorning, Baith evening and morning; Their jeering gaes aft to my heart wi a knell, When thro’ the wood, laddie, I wander mysell.