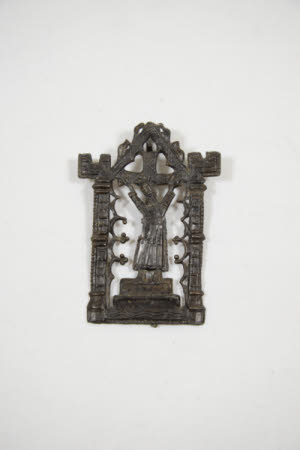 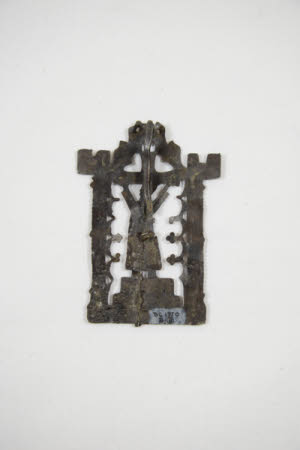 Pilgrim badge.The rood is framed by an elaborate canopy, a cinquefoil arch decorated with crockets standing on two columns marked with ashlar, delicately cusped within and pearled on the outer edges. Above each capital stands an overhanging battlemented turret. Christ is given a forked beard in keeping with late 14th century fashion.

Excavated in 1970 beneath the main bridge over the moat to Bodiam Castle. Other fragments of this type have been found at Canterbury. Traditionally listed as being from an unknown shrine, recent research suggests it may be a badge of the 'Holy Rood of Bermondsey'. Roods (crosses bearing the crucified Christ) were commonplace, but some were deemed particularly special. The rood at Bermondsey Abbey (London) was according to legend, found floating in the Thames after falling from heaven. It was set on the main gatehouse of the abbey, where it was described as being set into the wall. As the badge is set in a battlemented gateway, with water at the foot of the crucifix, this could fit with Bermondsey. The badge also shows stylistic similarities with the much copied Volto Santo or 'Holy Face' of Lucca in Italy, a version of which was associated with Bermondsey. Source: Colin Torode, National Trust Archaeology blog, August 2021 Pilgrim Souvenirs and Secular Badges by Brian Spencer (Museum of London, 2010) For more information and image: MNA127904 | National Trust Heritage Records