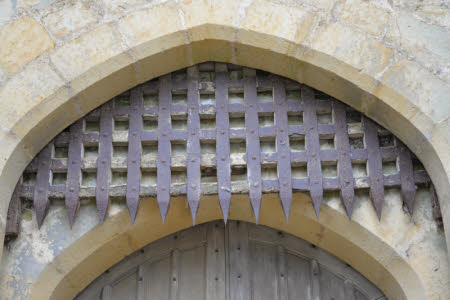 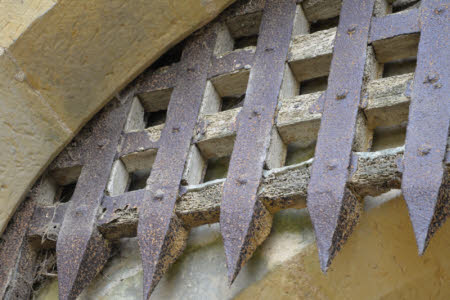 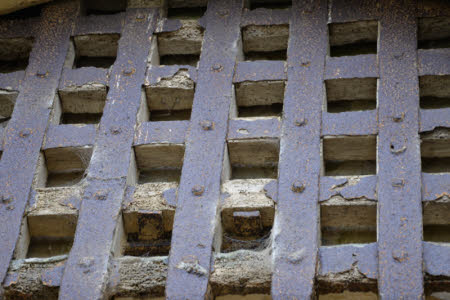 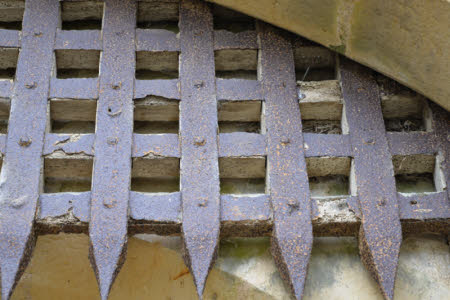 Made of oak, visibly iron-clad in its lower part, terminating in iron spikes. Its construction in such that it must have been built in as the stonework went up, and this conclusion is consistent with 14th-century dating demonstrating that the timber is of a date range consistent with the construction period of the castle. Analysis of the structure revealed the timber as grown AD1280-1410 with 94% probability. It is therefore one of a very small number of mostly 14th-century portcullis grilles to survive in Britain.

As is to be expected, Bodiam Castle, built by Sir Edward Dallingridge under licence dated 1385, once had portcullises protecting the entrances within its main gatehouse and its postern gate, as well as within the barbican which stood upon its own island in front of the main gatehouse. The barbican and postern gate were each fitted with one portcullis, but the main gatehouse had no less than three - one protecting the main external gate, a second separating the two internal chambers of the entrance passage, and a third protecting the gatehouse from the inner courtyard should the main part of the castle be taken. In common with most castles and fortifications, the former existence of these portcullises is today evidenced primarily by the distinctive grooves which extend up the external jambs of the doorways which they protected. These grooves continue upwards, over the opening, in the form of a slot built into the thickness of the wall. The purpose of the slot was to house the portcullis when in its raised position. Some form of internal opening was necessary at the head of the slot in order to allow the top of the portcullis to be fasten to the winding gear, either by means of ropes or chains. In addition, usually a pair of sockets were cut into the wall at this level in order to allow a timber locking bar to be inserted through the portcullis grille and into the wall behind it. The purpose of this device was to hold the grille securely in its raised position and - equally important - to lock it in place when lowered. In this way the locking bar prevented the portcullis from being lifted from below by attackers. Although the grooves and slots give evidence for the former existence of a portcullis, usually the portcullis grilles have long rotted away: early in situ portcullis grilles are now exceedingly rare. However, the conclusions of independently derived archaeological and scientific research in 2005 confirm the surviving portcullis at Bodiam was installed at the time of the castle’s construction. It is currently fixed in its raised position, held in place by 'modern' ironwork of indeterminate (but probably 19th century) date. The grille is supported at the edges by iron bars placed under the ends of the side stiles (…) and additional support is given by an iron bracket placed beneath the second rail up from the base of the grille, midway across the doorway. Source: Martin and Martin, An archaeological record and overview of the Portcullis at Bodiam Castle, Archaeology SE for the National Trust, 2005. The report includes the scientific dating report by Dr M. C. Bridge.