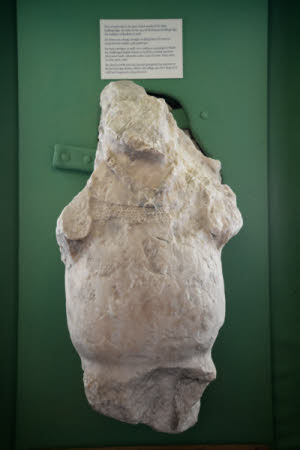 Alabaster, effigy fragment, c.1390-c.1410. Fragment of a mutilated tomb effigy depicting a life-size male torso, carved of alabaster, headless and armless and broken just below waist, all fractures extremely rough. The figure wears a close-fitting jupon (surcoat), bearing a cross-engrailed heraldic device. Over a camail (neck guard of mail) with a vandyked (zig-zag) edge is a plain gorget (throat covering), and over that a Collar of Esses with a ring for a pendant. Believed to be an effigy of Sir John Dallingridge (c. 1408), son of the bulider of Bodiam Castle. Slight remains of original vermilion colouring and of gilding extant in the 19th-century.

This object was revealed in 1823 by Edward Allfrey through excavations at Robertsbridge Abbey; Allfrey had purchased the manor of Robertsbridge in 1822. It was presented by Allfrey to Henry Pelham, 3rd Earl of Chichester, as an effigy fragment of his ancestor Sir John Pelham (d. 1429). The fragment was eventually buried in the garden of the Earl's Mayfair residence. It was re-exhumed with the intention of being placed in the coach-house. However, at the suggestion of Mark Anthony Lower, founder of the Sussex Archaeological Society, it was later presented to Lewes Castle Museum in 1860. The cross-engrailed device on the jupon identified the figure as a member of the Dallingridge family. MA Lower identified the effigy as Edward Dallingridge (d. 1393), the builder of Bodiam Castle. He suggested that the cross engrailed device roused the iconoclastic zeal of the demolishers of Robertsbridge Abbey during the Dissolution of the Monasteries (1536-41). Saul, Mackman and Whittick date the object to c.1420 based on the evidence of the armour. They agree the arms are those of the Dallingridge family, but the presence of the Lancastrian collar of SS proves that Edward' son Sir John Dallingridge is the subject. Unlike his father he enjoyed a good relationship with the house of Lancaster. He died in 1408. Following his father’s prominent position as councillor to Richard II, Sir John Dallingridge had become a member of the entourage of the man who would become Henry IV. Promoted to knighthood he had eventually joined Henry IV’s elite ‘King’s Knights’. He had represented Sussex in parliament and had been frequently employed on the King’s business. John Dallingridge died on 27 September 1408. He was buried in the Cistercian abbey church at Robertsbridge, next to the tomb of his parents, and his executors subsequently paid a ‘great and notable sum’ to ensure that the monks would regularly commemorate the anniversary of his death. The detailed arrangements with the monks do not mention the effigy. Research by Saul, Mackman and Whittick reveals that the executers of Dallingridge's will initially commissioned a different effigy from a London mason. This resulted in a legal dispute. The effigy at Bodiam Castle is suggested to be the replacement, made by the Midlands firm of Prentys and Sutton.