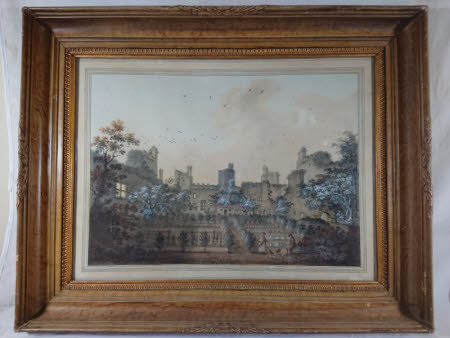 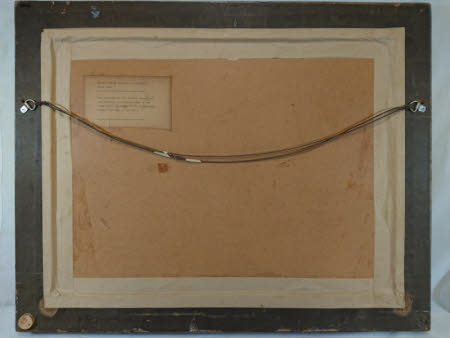 During the 18th century Bodiam Castle was rediscovered by antiquarians, creating a market for prints and drawings of Britain's ruins. James Lambert (1725-1788) was a Lewes-based musician, stationer, decorative painter and watercolourist. He painted touristic views, gentry houses and prize cattle and sheep, assisted by his nephew James (1744-1799). A significant collection of Lambert’s work, with 269 watercolours of Sussex, is preserved in the William Burrell topographical collection in the British Library (https://www.bl.uk/picturing-places/articles/watercolours-in-william-burrells-collections). As well as working on commission, he made copies from his stock. John H. Farrant gives some insight into Lambert's personality and his significance for Sussex: 'His natural diffidence and taciturnity had held him back from the London art world beyond the exhibitions, but in eastern Sussex he was the first painter to be an artist rather than solely an artisan.' (ODNB, 2008) Lambert's depiction of Bodiam Castle shows the courtyard used as a vegetable garden. The couple depicted, whose identities are unknown, may have lived in the cottage built at the centre of the hall range, smoke coming from its chimney. Archaeological evidence suggests the cottage may have been a late iteration of a more substantial structure built inside the castle. By 1825, memory of this dwelling had perhaps gathered myth: 'Adjoining the kitchen, and within the entrance to the south front, are the remains of a wooden hut, formerly occupied by a noted smuggler'. (Rouse 1825, op cit Bodiam Castle CMP 2016) Whether such a structure was planned or approved by the then owners of Bodiam Castle is not known. From 1723 it was owned by the Webster family, who are not known to have taken an active interest in the castle, likely acting as absentee landlords. In 1784 when the watercolour was made, Bodiam Castle was owned by Sir Godfrey Webster (1749-1800), who had also just inherited Battle Abbey, Robertsbridge Abbey as well as other large estates in the area. Through marriage to Elizabeth Vassall he also came to own plantations in Jamaica and New England with enslaved people. An early antiquarian description of Bodiam Castle dates from this period. In 1788 Lord Torrington tried to visit and found it locked and inaccessible. He wrote: 'This castle belongs to Sir Godfrey Webster, who has locked up the gate leading to the interior of the square and from narrowness of possession does not allow a key to any neighbour; tho, surely a proper inhabitant would secure and preserve it and get a livelyhood (or at least much support) from us, castle hunters'. (Thackray 1991, op cit Bodiam Castle CMP 2016) See also NT 67575 for a similar view.