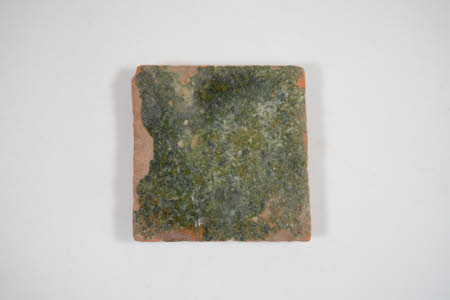 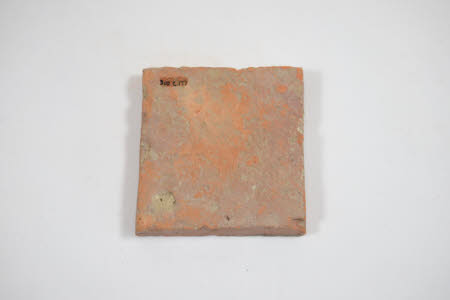 This tile is part of a large group of 417 floor tiles, recovered from the area under the chapel in 1919-1920. The tiles likely date from the construction of the castle, c.1385 - 1393. This fits with the period in which tiles of this type and size are known to have been made; Museum of London Archaeology advise a date range of 1270 - 1480. The tiles were imported from the Low Countries. They would have been laid out together to form a checkerboard floor recreating the effect of a more costly black and marble floor. Potters only had a limited range of colours they could produce at the time. After firing in the kiln at low temperatures, the translucent glaze turns an amber or honey colour owing to the iron-oxide in the glaze, which may appear cream-coloured over the white slip. The mottled green was produced by adding copper-oxide to the translucent glaze. The tiles were set in mortar over rough boarding. These were known as Flemish tiles in England. George Nathaniel Curzon, Marquess Curzon of Kedleston (1859-1925) owned Bodiam Castle from 1917 to his death in 1925, when he left it to the National Trust. In June 1919 he had begun a fifteen-month period of research and renovation, employing a staff from twenty to thirty workmen. This included excavation of the moat and parts of the castle. In his book 'Bodiam Castle' (published 1926) he detailed his research, excavations and repair, and interpreted his findings. He wrote of the tiles: 'The floor of the Sanctuary was probably two steps higher than the nave and was originally covered with small glazed tiles, with bevelled edges, of blue, yellow, green and brown colours, a number of which were found in the course of excavation. They aer now exhibited in the Museum.' Today a small selection of the tiles is on display at Castle Cottage, adjoining Bodiam Castle. See also: NT 67401-67405 and bulk entry NT67406