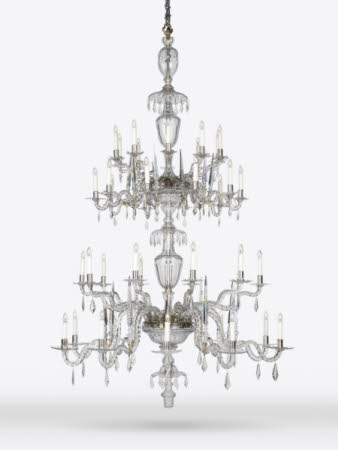 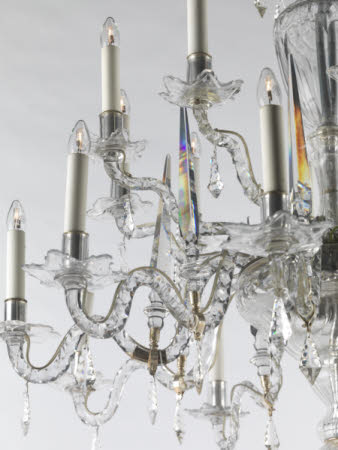 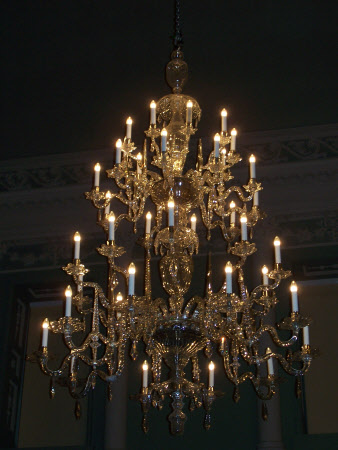 The Assembly Rooms in Bath were a popular destination for fashionable and polite society in the late 18th and early 19th century, hosting glamorous balls, concerts and teas. The novelist Jane Austen (1775–1817) visited on several occasions and set scenes from her novels Northanger Abbey (1817) and Persuasion (1818) at Assembly Room balls. The rooms, first opened in 1771, received visitors throughout the autumn, winter and spring, and balls began in the early evening, continuing until midnight. Unsurprisingly, the lighting in the ballroom was important to heighten the drama of social occasions, bringing a sense of opulence and glittering magnificence. Five spectacular glass chandeliers illuminate the ballroom, each with 40 double-curved lead- crystal arms for wax candles. They were made by William Parker (active c.1756–1800), who had a workshop in Fleet Street, London, and they still hang in the Assembly Rooms today.

A lead crystal forty-branch chandelier, one of a set of five (NT 67104-67108), made by William Parker (active. c. 1756-1800) of Fleet Street, London, in late 1771. Having a vase-shaped stem blown with multiple decorative knops and fitted with a pair of receiver plates, each issuing twenty branches – ten of ‘S’-scroll profile and ten undulating branches ‘kicking’ upwards – all dressed with facetted kite-shaped drops. Each branch terminating in a stellar-shaped drip-pan with an ogee-profiled edge – the drip-pans to the upper tier of six points, and to the lower tier of eight points – and fitted with a glass candle nozzle. Later fitted for electricity and with some replaced parts.

Bath’s ‘New Assembly Rooms’ opened in 1771, designed by John Wood the Younger (1728-82). They were the social epicentre of the popular spa town, providing daily entertainment including balls, concerts, teas and gambling. ‘Polite society’ flocked to the Assembly Rooms, including the novelist Jane Austen (1775-1817), who included them in Northanger Abbey (1817) and Persuasion (1818). The five magnificent Ball Room chandeliers were supplied by William Parker of 69 Fleet Street, London. It was the commission that established his reputation as the foremost maker of his day, going on to supply the Prince Regent amongst many others, and a company that traded for well over a century. Parker’s chandeliers in the Assembly Rooms remain the most significant from the 18th century, and still hang in the room they were made for. William Parker was not the original Ball Room supplier. Within weeks of opening, on the 24 October, a chandelier arm ‘fell down during the time the Company was dancing’. They were swiftly dismantled, and the Furnishing Committee demanded their money back from maker Jonathan Collet. Legal wrangling lasted several years, but a new set of five were ordered immediately from Parker for an agreed £500 with delivery in ten weeks. He had already supplied chandeliers for the Tea Room (NT 67118-67120, one of which is signed PARKER FLEET STREET LONDON) and was seemingly in Bath when the collapse occurred, and so able to inspect the damage and quote for replacements on the spot. Collet’s chandeliers were removed, though some elements were subsequently repaired and repurposed for the Octagon Room (see, for instance, NT 67132). Parker is credited with introducing neo-classical design into chandelier form in the Ball Room quintet. For the first time heavier spherical stems were replaced with lighter vase-shaped forms. The Bath season ran over the winter, with balls starting at 6pm and dancing until 11pm. Consequently, each of the forty double curved lead crystal arms provided essential illumination above the fashionable crowd.

Ordered by the New Assembly Rooms Furnishing Committee, 24 October 1771, at a cost of £500 for five, to be delivered in 10 weeks and paid in full 31 January 1772 £559; Assembly Rooms purchased by the Society for the Protection of Ancient Buildings in 1931 and transferred to the National Trust.