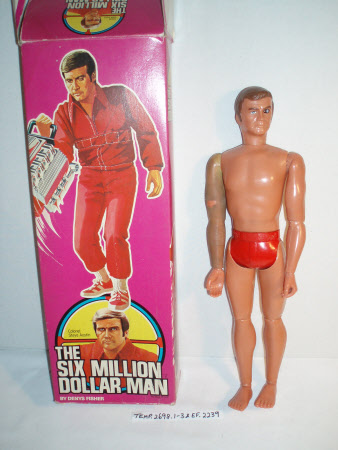 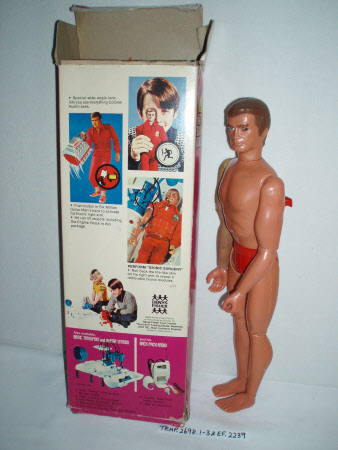 A 'Six Million Dollar Man' doll (Steve Austin) from the 1970s TV series, in it's original box. The plastic doll has a moulded plastic swivel head, with moulded and painted facial features and moulded brown hair. His left eye socket has a piece of transparent plastic in it. A hole in the back of the doll's head allows a child to look through the eye socket. He has a moulded plastic torso, arms and legs. The arms are jointed at the shoulders, elbows and wrists. The legs are jointed at the hips, knees and ankles. His right arm is covered in a skin tight rubber sleeve which can be pulled back to reveal bionics. This rubber is showing signs of perishing. On the doll's back is a red plastic plunger which, when pressed, originally activated his bionic arm. The doll has no clothes. Also missing is a toy engine block which originally came with the doll. The rectangular cardboard box has an illustration of Steve Austin lifting an engine. Underneath this is a head and shoulder illustration of him next to his name and the TV programme title. This is repeated around the box. A further illustration is on the side. The background colour of the box is printed a purple-pink. On the back of the box are photographs and illustrations of children playing with the doll and other products in the range. Information about what the doll can do and the manufacturer is also given. Inside the box is a piece of cardboard printed purple, with a dissecting white, red and white stripe. A pink plastic tie is hooked through two holes which originally tied the doll into the box. Total number of items is 3.