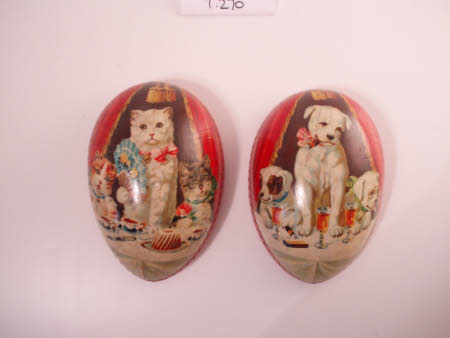 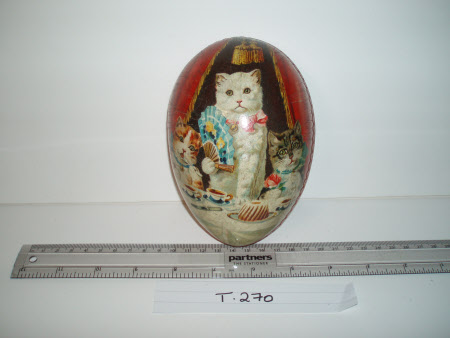 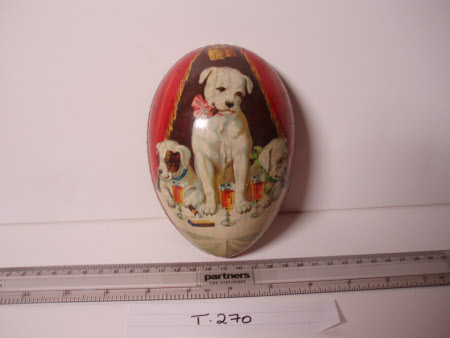 A cardboard Easter egg in two halves. Each half has a colour illustration on paper. One half depicts a white cat holding a blue fan, with a ginger and white cat wearing a blue ribbon and bell around its neck. On the other side of the white cat is a black, white and grey cat, also with a blue ribbon around its neck. They are all at a table laid with three cups of tea, a knife and a dessert. The other half of the Easter egg depicts a white dog with its front paws on top of a table or counter, smoking a cigar with a pink bow around its neck. On one side is a brown and white puppy with a blue collar, holding a cigar in its left front paw. On the other side is a white puppy with a blue collar smoking a cigarette, wearing gold rimmed glasses and reading a paper. In front of each of them is a drink in a tall glass. There is also a box of matches. In both illustrations the animals are flanked by red curtains with gold coloured tassels and fringe. The interior of each half is lined with green and white paper printed with a geometric design. Around the inner edge of the half illustrated with cats is an embossed and pierced paper trim imitating lace. The exterior of both halves is varnished. Also on the exterior is a leaf shaped red paper trim. Total number of items is 2.