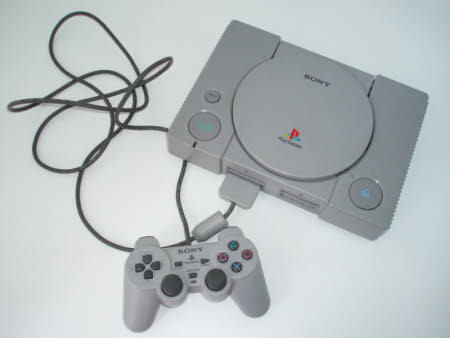 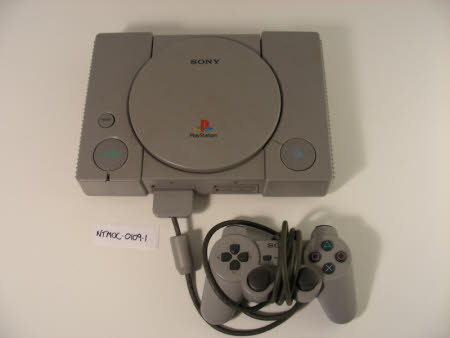 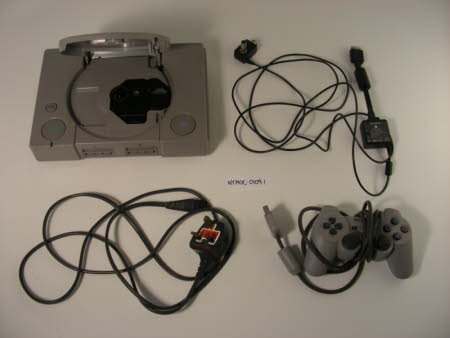 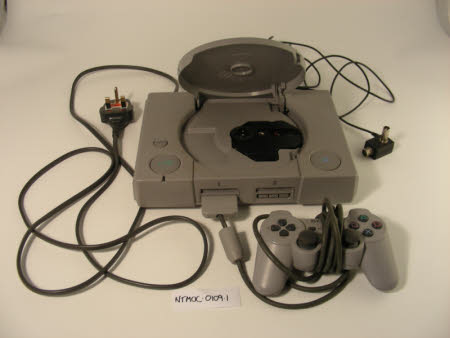 A Sony PlayStation games console. The game itself is a rectangular shaped box made of grey moulded plastic. On the top is a circular, spring-loaded opening which is where the gaming discs are inserted. Inside here is the lens for reading the discs. There are three buttons on the top. On the left-hand side is 'Reset' in black print, with the bigger on/off button below with a green symbol. On the right-hand side is the eject button with a blue symbol. It also has 'Compact disc' embossed on the top right corner of the opening section. The front face has two 'Memory Card' slots numbered '1' and '2'. Each side has grooved plastic in vertical lines repeated to create holes to allow cooling when in use. The back face has three sockets, one for 'Serial I/O', another for 'AV Multi Out' and one for '~ AC In', These are where different outputs can be connected. The underside has pads for the console to rest on in each corner and many horizontal slits going across. Also there are six screws holding it together. A label contains all the manufacturer information and model number etc. Also with the console is one controller in the same grey plastic with a darker grey insulated lead that connects it to the controller socket, on which there is a sticker with further information in silver. The controller itself is an oblong shape with rounded edges for hands to grip. It has two protruding analog sticks in plastic with soft rubber-like coating, plus four direction arrows on the left, three buttons in the centre (Select, Start and Analog) and four more circular buttons with different coloured shapes on the right. On the back face are two more buttons on each side in darker grey which are numbered '1' and' 2', 'L' and 'R' respectively. On the underside of the controller is the imprint of the manufacturer. A separate 'RFU Adaptor' cable is included, which as four plastic sections in between black plastic insulating cable. One end fits the slot on the console labelled 'AV Multi Out' and the next box along the cable is an adaptor which can be moved between 'I' and 'G' using a small plastic switch on it. At the other end of the cable is a square plastic box with two metal cylinders labelled 'Ant' and 'Out'. Finally there is a dark grey plug socket and cable which connects to the '~ AC In' slot on the console. The other end of the cable has the three-pronged plug itself. The fuse is visible through a square hole in a red plastic insert. Total number of items is 4.

Bottom of console, above the sticker: 'P.S.R'