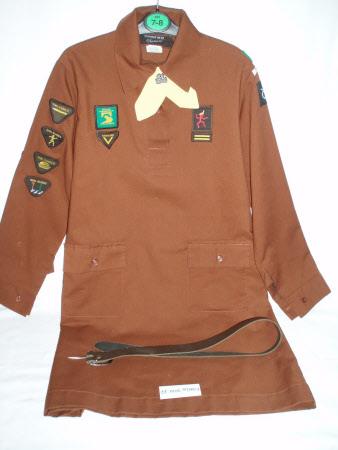 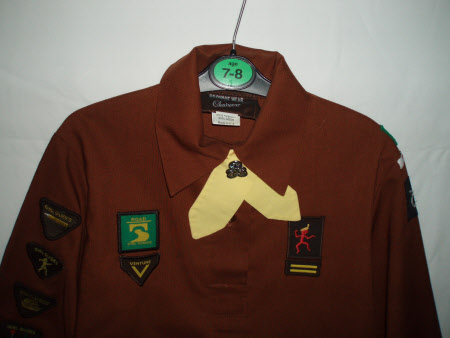 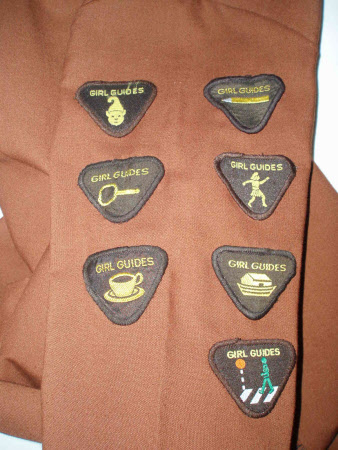 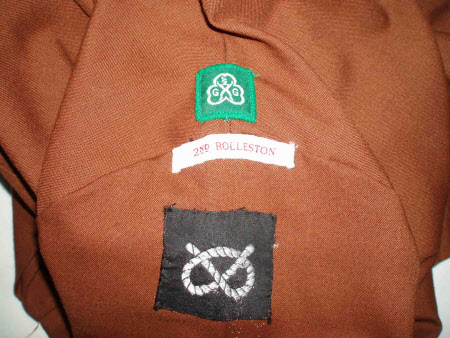 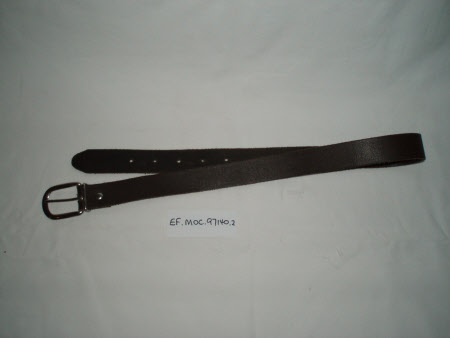 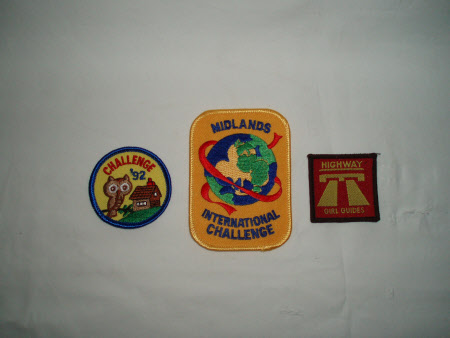 A brown polyester-cotton Brownie uniform dress (circa 1989), along with its brown leather belt and yellow polyester-cotton necktie, which has a 'Girl Guides' brooch pinned to it. Owned by the depositor's daughter Julia (born 1982) and worn between 1989 and 1991 (when owner aged 7-9) At the back of the neck, on the inside, are sewn a large brown maunfacturer's label and a white label with washing instructions. The dress has long sleeves which fasten by means of brown plastic buttons at the cuffs, a collar with a short placket at the front, which fastens with two more brown plastic buttons and two patch pockets with flaps at the tops which also fasten with brown plastic buttons. There are several woven nylon badges sewn on the front of the dress and on both sleeves. The badges on the front comprise a brown one embroidered in red with the figure of an elf-type figure wearing a yellow cap (a Kelpie - the group within the Brownie 'pack' to which the owner belonged), a brown one embroidered with two yellow horizontal stripes, a green 'ROAD' badge which has a brown border, and a V-shaped badge, which is brown with 'VENTURE' and a capital 'V' embroidered in yellow. On the left shoulder is a square green badge with a small figure and 'GG' inside a clover shape - all in white. Below this, at the top of the sleeve, is a white badge embroidered in red with '2ND ROLLESTON' and a large black badge which has the 'Stafford knot' embroidered in silver-coloured thread. On the right sleeve are several achievement badges which are all brown, triangular (with rounded corners) and embroidered in yellow with 'GIRL GUIDES' and an image. The images are mostly yellow, except the road safety one which has a black and white zebra crossing with a black, white and orange belisha beacon and a green figure crossing the road. The necktie fastens at the back with a white plastic button and is sewn in such a way as to resemble a 'tied' tie. Fastened to the front, at the neck edge, where the pieces of the tie cross over each other, is a silver-coloured metal brooch which is clover-leaf shaped and has a moulded image of a small figure and 'GG', similar to that on the green, 'shoulder' badge. The belt is made from dark brown leather and has a silver-coloured metal buckle. Total number of items is 3.