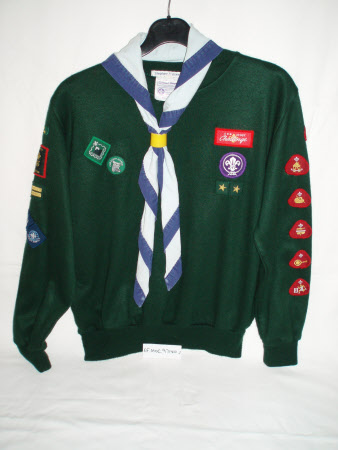 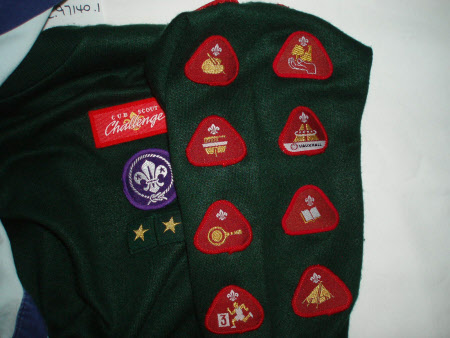 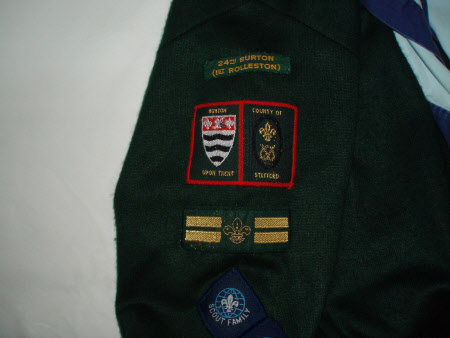 A Cub Scouts jumper made from green acrylic sweatshirt fabric (1993). It has a round neck and long sleeves, and has many woven nylon badges sewn on to the chest and both sleeves. There is also a pale blue neckerchief with a dark blue border and a yellow plastic 'woggle' used to hold the neckerchief together. At the back of the neckband, on the inside, is a white ribbon name tape embroidered with the owner's name, and a manufacturer's label. The badges sewn to the front of the jumper comprise a purple 'Scouts' badge, a red 'Cub Scout Challenge' badge, a green 'Cub Scout Award' badge, a green 'Adventure' badge and two small square green badges with yellow stars embroidered on them, each denoting a full year as a member of the Cub Scouts. On the right sleeve are a green badge which has '24th Burton (1st Rolleston)' embroidered in yellow, a green badge bordered in red which shows the Burton-on-Trent and Staffordshire Scouts badges, a green badge embroidered in yellow with the Scout fleur-de-lys emblem between four stripes, and two diamond-shaped 'Scout Family' badges embroidered in pale blue and white. On the left sleeve are eleven red triangular (with the points rounded) shaped badges embroidered in yellow and white. These are 'achievement' badges and were awarded to the owner when he had completed particular tasks, such as camping, art and housekeeping. The neckerchief was originally triangular but has been left rolled, i.e. as it would be worn, secured by a woggle. The woggle is a short cylinder of yellow plastic, and denoted which 'six' the owner belonged to. Total number of items is 3.