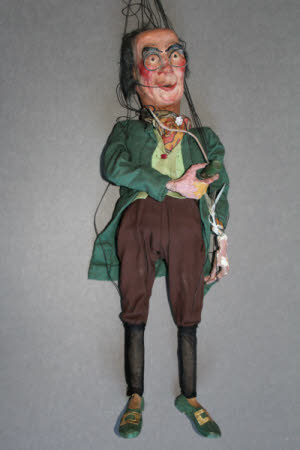 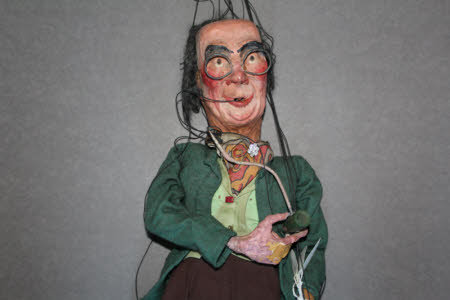 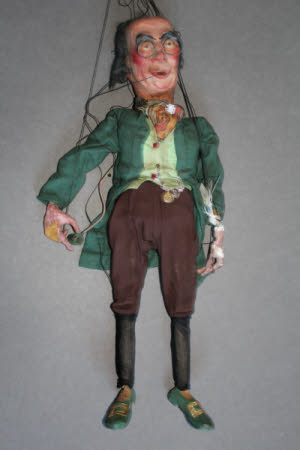 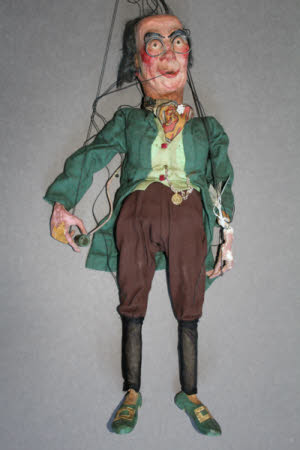 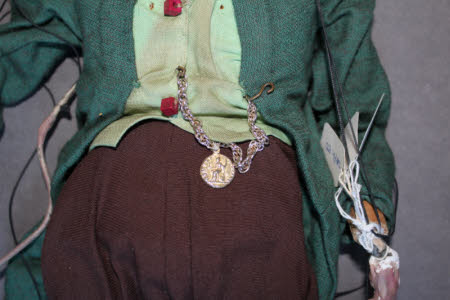 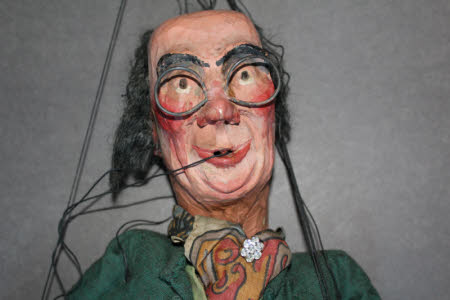 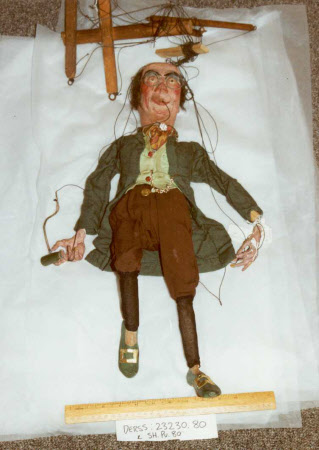 One of the puppets made by Edward G. Hellawell for his puppet theatre known as ‘The Lilliput Theatre Company' or 'The Lilliput Marionette Theatre' This marionette of the character 'old' Mr Fezziwig', Scrooge's first employer' is from a play entitled 'A Christmas Carol' based on the novella by Charles Dickens. This play was possibly the first to be created and performed by the theatre in the late 1940s. A marionette puppet of an old man wearing spectacles and smoking a pipe, with a wood and metal control and strings made from strong black cotton thread. He has a carved wooden head with painted facial features. His mouth has a hole in it through which a string passes and is connected to his long-stemmed pipe. His head is joined at the neck by means of a thick piece of cord which is attached at each end with metal loops. He is jointed at the shoulders, elbows, wrists, waist, knees and ankles with metal joints. His body is made from wood, with modelling material hands. He has a pair of spectacles made from quite thick silver-coloured. He is wearing a dark green, woollen, short-waisted tailcoat over a pale green, cotton waistcoat with two red, wooden cube-shaped buttons. He also has a brightly-patterned, cotton cravat. He has brown, cotton, knee-length trousers with black, nylon, footless socks between his knees and ankles. His shoes are painted on in dark green, with rectangular buckles made from gold-coloured cardboard, glued on. His pipe, which is attached to his right hand. History of the company The company was created by Edward G. Hellawell (born 1914-1983) and Bernard C. Lewis (died 1982). As a student at the Royal College of Art in the mid 1930s Edward made sketches for a puppet theatre and between circa 1937 and circa 1947 he created five plays, each with its own cast of hand-crafted marionettes (over 100 puppets). The Museum hold over 90 of these marionettes. The heads were either made from molding 'Plastic-Wood' (a commercial product now discontinued) on a frame or carved from solid wood - finished with paint and varnish. Limbs were made from solid wood with hands made using 'Plastic-Wood' molded onto a wire frame. The 'controls' were made from wood and had fixed leg bars which allowed a puppeteer to operate two puppets at once. Edward's wife Margery was the costumier and dressed the marionettes using scraps of fabric she had gathered together; fabric being scarce during the war. The cast for each play were created in the basement of Edward and Margery's Walsall home. Four of the plays were for younger children (A Christmas Carol, The Lost Princess, The Little Mermaid and Hansel & Gretel) and one was for college students (Faust). The plays were performed to school children across the county - mainly around the Midlands but there is photographic evidence that the theatre performed at Granard Primary School, Putney Park, London in 1963. The theatre also toured seaside resorts such as Blackpool and Herne Bay and did a three week tour in Northern Ireland in the late 1950s and also went as far a field as Norway in 1963. Almost from the start he worked with his friend Bernard C. Lewis (died in 1982). It is thought that they met in prison, serving time as conscientious objectors during the War. When Edward was appointed Head of the Art School in Nuneaton in 1952 he stepped down from performing, handing over Artistic Directorship to Bernard, who continued to tour the theatre around the country until his death in 1982.The theatre (set and staging etc...) then went to auction, but the puppets were donated to the Museum.