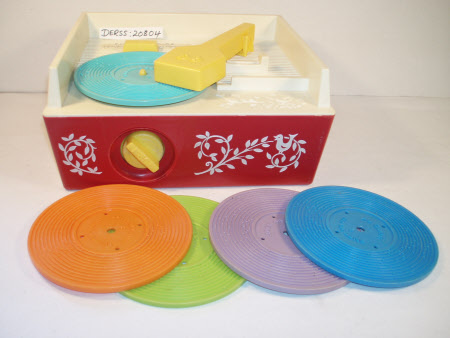 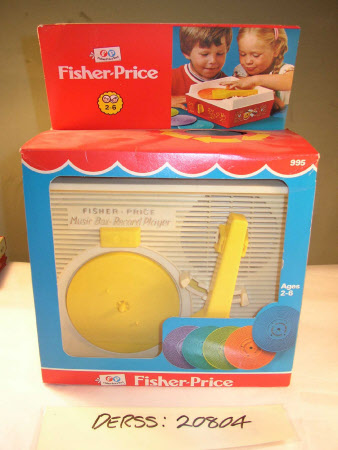 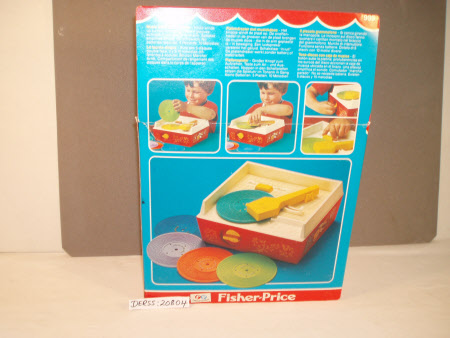 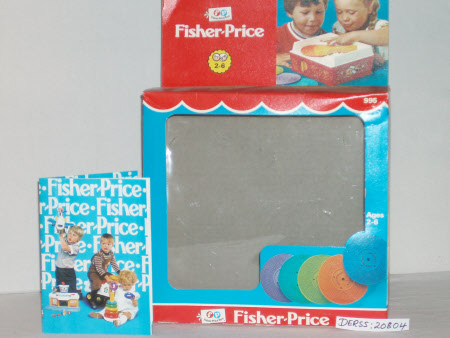 The box has a clear plastic front within a cardboard border. The edges of this border are blue and red. The logo and name of the manufacturer are printed in white inside a red stripe at the bottom of this. Also around this border is a colour photograph of the records and 'Ages 2-6.' printed in white. At the top is the number '995.' This is repeated around the sides. The lid of the box is red, with a circular hole on the right hand side bordered with five yellow arrows. Above this is a red cardboard flap, with a colour photograph of a boy and a girl playing with the record player and the manufacturer's name, logo and ages. The back and sides of the box again are red and blue, with photographs of children playing with the record player and how it works. Above these photographs is text describing how the record player works in various languages. Underneath, the box is white with information and addresses of the manufacturer in English and other languages. The back of the box is slighty torn and the plastic front is loose. The toy record player itself is made of plastic and has a yellow turntable, yellow movable arm and yellow on/off switch on a white top that is decorated with grooves. Embossed in grey is 'FISHER-PRICE / Music Box Record Player.' Around the record player is a white edge. The sides of the record player are red plastic with a white flower pattern. On the front is a yellow plastic winding dial with 'TURN' and arrows inscribed on it, to wind the music box up. Around the other edges are labels showing a colour illustration of a yellow guitar and brown recorder, on sheets of music. The back of the record player has a yellow handle and a hollow slot for the records to be placed in. The underneath of the record player is plain red. The record player comes with eight plastic records that can be played, a song on each side. These records are: 1. 'HUMPTY DUMPTY' and 'JACK AND JILL' which is purple. 2. 'AU CLAIR / DE LA LUNE' and 'TWINKLE, TWINKLE / LITTLE STAR' which is dark blue. 3. 'LONDON BRIDGE' and 'OH WHERE, HAS MY / LITTLE DOG GONE' which is orange. 4. 'CHILDREN'S / MARCHING SONG' and 'CAMPTOWN / RACES.' which is green. 5. 'HICKORY DICKORY / DOCK' AND 'EDELWEISS' which is light blue. The box also contains a colour catalogue illustrating many Fisher-Price products. The box and the record player give details that the musical movement was made in Switzerland, the record player was manufactured in Great Britain and some of the parts were made in the U.S.A The text on the bottom of the box reads: 1971, 1977 Fisher-Price Toys, East Aurora, NY 14052, U.S.A / Division of The Quaker Oats Company / Trademarks of The Quaker Oats Company, Fisher-Price Toys, authorised user. / Manufactured in England by Fisher-Price Toys, P.O. Box 65, Northampton, England. / Made in Great Britain / Printed in Great Britain / Includes parts from U.S.A Total number of items is eight