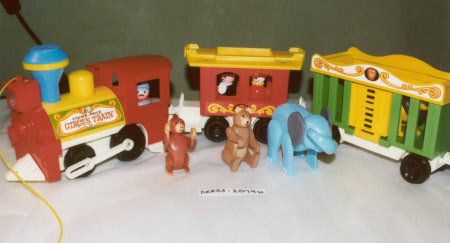 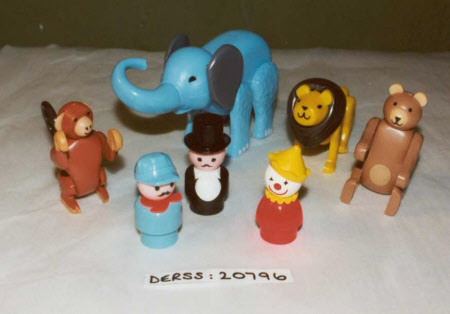 A Fisher-Price Circus Train, complete with its original box and accessories. The train and accessories are all made of plastic, with metal rivets holding the train pieces together. The train consists of three pieces - the locomotive, a carriage, and a cage. All have white bases and black wheels. The locomotive has a red cab and front end, with a yellow boiler and blue chimney, and white coupling rods and cow-catcher. On each side of the boiler is colour-printed paper label which reads 'FISHER-PRICE/ CIRCUS TRAIN/ 991'. Inside the open-backed cab is a moulded bench with two holes for inserting the driver and other figures. At the back is a large white hook for attaching to the carriages. Attached to the top edge of the front is a long, yellow plastic cord for pulling the train along. The carriage is red with yellow doors at the front and back and a yellow roof. On each side, below the windows, is a colour-printed paper label with a picture of a monkey's face and 'c 1973 FISHER-PRICE TOYS DIVISION OF QUAKER OATS CO.'. Inside, along one side, is a moulded bench with two holes which form seats for the figures. The cage is green with a yellow roof and a yellow door which lets down, halfway along one side. Both the carriage and the cage have a large plastic hook at one end and a large plastic ring at the other, for joining to the other parts of the train. There are three human figures, with cylindrical bases - a train driver, a clown and a ringmaster. The train driver is blue, with a pink head and blue cap and neckerchief, the clown is red, with a white head, a yellow pointed hat with a frilled brim and a yellow ruff round his neck, and the ringmaster is black, with a pink head, a white collar, bow tie and shirt front, and a black top hat. There are four animals - an elephant, a bear, a lion and a monkey. All have black-painted facial features and jointed legs, the bear and monkey have swivelling heads, and the elephant has a swivelling trunk and a head which can be moved up and down. The elephant is blue with grey ears and tail, the bear is brown, with light brown nose and ears, the lion is yellow with a brown mane and tail, and the monkey is brown with light brown nose and ears and a dark brown tail. The box is made of cardboard, colour-printed with pictures of the train being played with, with three 'windows' backed with clear plastic in the front. Inside is an L-shaped, moulded polystyrene piece which contains the train, with the accessories in a clear plastic bag. Also in the box is a colour-printed leaflet showing details of the Fisher-Price range of toys, with photographs. Total number of items is fourteen