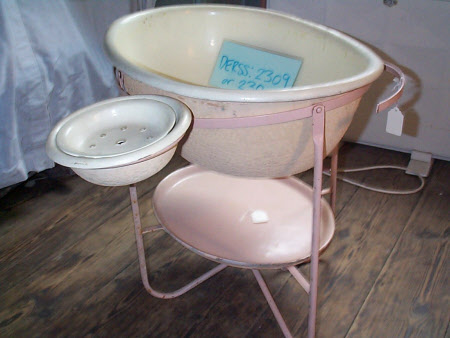 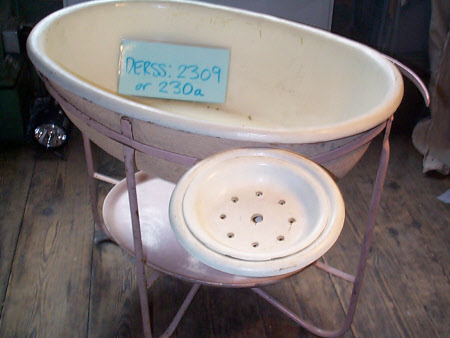 A baby's oval, papier mache bath (possibly early 20th century) made by the company 'Thetford Pulp Ware'. It is painted cream suspended on a folding metal stand painted pink. (The two no longer separate). The stand has two stretchers which form an 'X' shape between the four legs. Protruding from one side of the oval shaped upper edge of the stand is a circular shaped extension. Suspended inside this is a papier mache bowl and a perforated dish which sits inside it. Both are painted cream. There is also a papier mache oval tray painted pink. On the other side of the oval shaped upper edge of the stand is a hinged arm. The bath is possibly associated with a yellow painted papier mache bucket which has a cream-pink base - see DERSS : 23002. ‘Thetford Pulp Ware’ was a specially patented waterproof papier-mache like material. It was made from jute bagging, wood pulp, vegetable fibers and rags. Founded in 1879, the company continued producing Pulp ware until the 1950s when production shifted to modern plastics. Total number of items is 4.

Donated to the Museum of Childhood by Mrs Carter in February 1990.