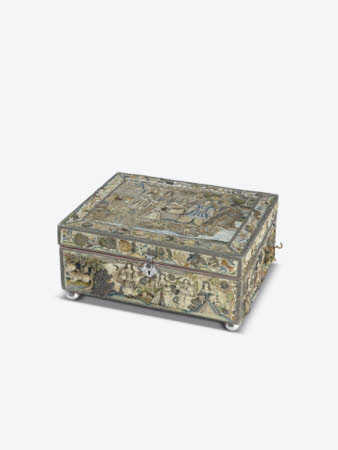 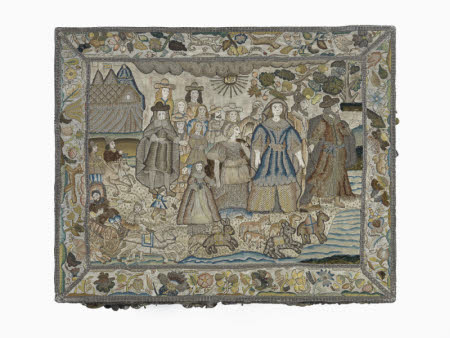 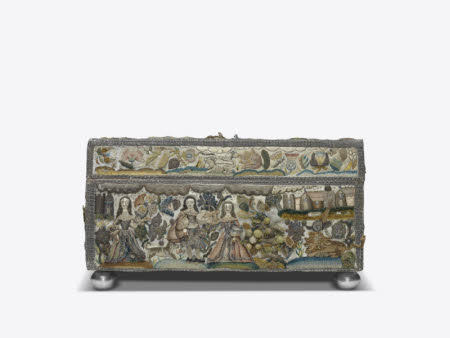 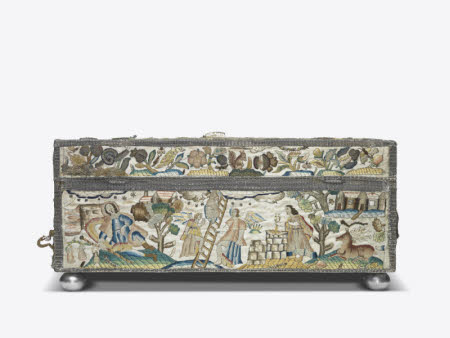 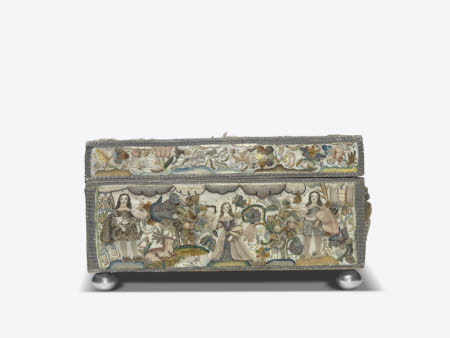 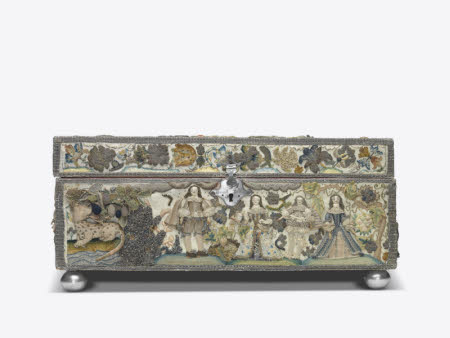 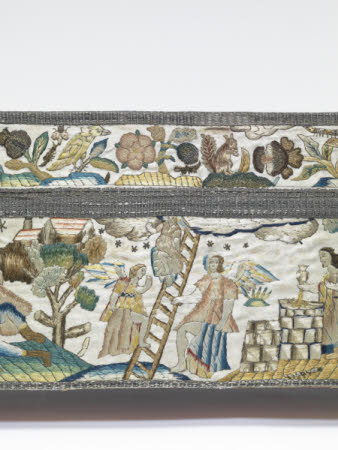 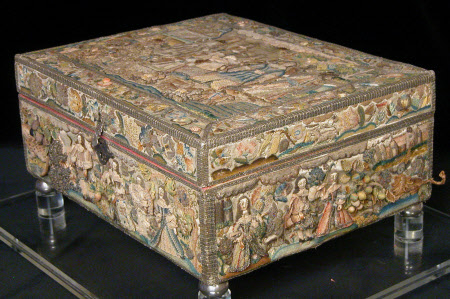 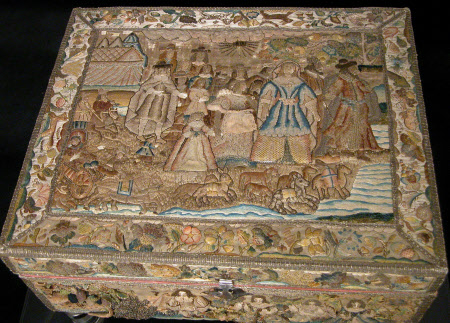 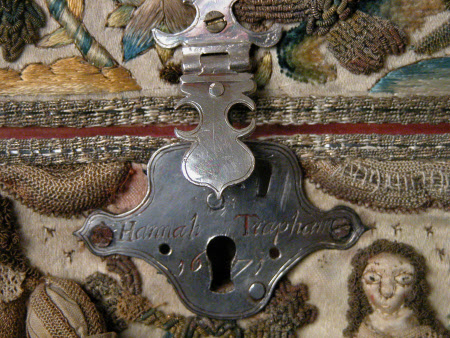 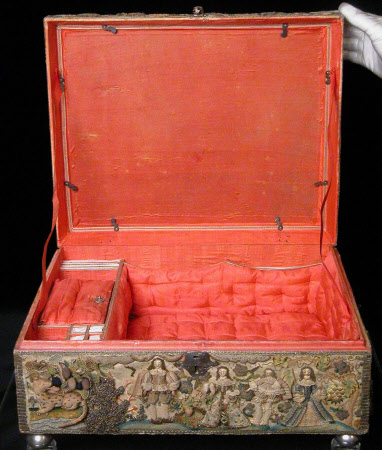 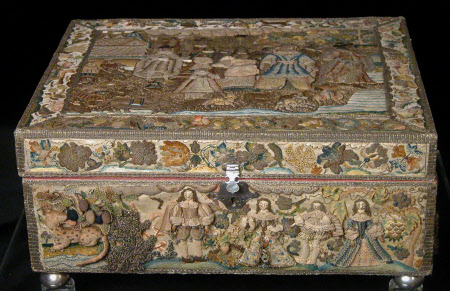 The pleasure of an intricate craft project is something that many of us still enjoy, even more so when it provides us with beautiful and useful objects to display at home. This late 17th- century box was made by a young woman called Hannah Trapham (her name appears on the lock plate), and she was probably living in or near Canterbury in Kent. Little else is known about her, but she used her impressive needlework skills to decorate this box, which held personal items, such as bottles and, at one time, a mirror. It also had space for a secret drawer. Typically for this period, the decoration includes animals (such as leopards, squirrels and foxes), flowers and fruit, as well as various biblical scenes, including the story of Jacob’s ladder (Genesis 28:10–19). Hannah would almost certainly have copied these designs from European engravings that were in ready supply for such domestic craft projects.

A raised work box embroidered by Hannah Trapham in 1671. The wooden box is finished with embroidered panels worked on ivory-coloured silk satin. The five main embroidered panels depict religious and court scenes and the lid is finished with borders decorated with flowers, insects and animals. They are worked in polychrome silks, chenille, metallic thread, purl and pearls in long and short, split, buttonhole and brick stiches, laid and couched work and French knots and are trimmed with silver gilt braid. The interior is lined with madder-dyed silk, quilted in parts. The casket stands on four silver ball feet and has a fretted silver hasp and lock engraved 'Hannah Trapham 1671'. Little is known about Hannah Trapham’s life, although it is thought that her family came from Wingham in Canterbury, Kent.

This box is characteristic of a type of pictorial embroidery decorating pictures, mirrors, baskets and boxes, made and used by girls and young women during the 17th century when needlework was regarded as an essential skill. A distinctive feature can be the use of padded raised work as in this example, creating a tiny three dimensional fantasy world filled with fashionably dressed people in landscapes filled with a profusion of fruit, flowers, insects and animals. Such embroideries marked the culmination of young women’s needlework education and were a demonstration of their accomplishment and skill. In this case, the panels were then mounted on to wood and made into a box and a smart silver-gilt braid was used to cover the joins. The expensive materials and time required restricted their creation to girls from privileged households. The engraved silver lock plate tells us this embroidery was completed by Hannah Trapham in 1671. Sharing a practice with needlework samplers, the addition of a makers name was an expression of individual identity and is often the only reference to a life that may otherwise be lost to history. Very little is known about Hannah Trapham but it is believed her family came from Canterbury, Kent. Designs were often copied from contemporary prints and pattern books such as Richard Shorleyker’s A Scholehouse for the Needle (1632) and could also be bought drawn or printed onto satin of canvas ready to be worked. Popular subjects included biblical and mythological scenes, representations of royalty and personifications of the Senses, Seasons, Continents or Virtues. The most recognisable story on this box is Jacob’s ladder (Genesis 28:10-19). Between scenes, a squirrel, fox, and other animals jostle for space amongst cornflowers, tulips, strawberries and snails. On the front, a plump leopard can be spotted licking a cluster of grapes, an allusion to Bacchus (known by the Greeks as Dionysus), god of winemaking and fertility. Whilst publicly displaying needlework skills, this box also provided a private place for personal possessions. Lined with a striking salmon-pink silk, there is a large well on the right and a series of small compartments along the left, including secret drawers. One compartment holds small glass bottles and the inner lid was originally covered with a mirror (now lost).