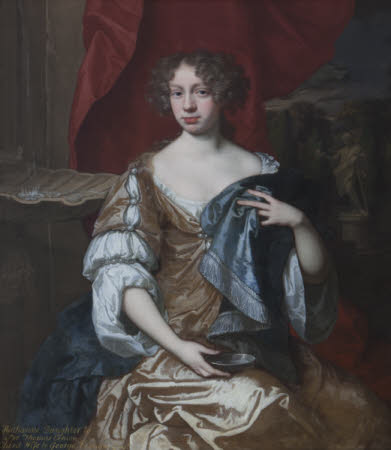 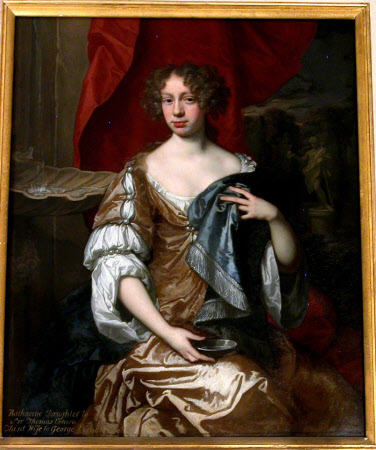 George Vernon married three times. His wives brought with them the financial backgrounds, as well as personal and social advantages, which were required in order for George to realise his vision. Catherine was George's cousin and they married in 1681 when she was just 18.

Oil painting on canvas, Catherine Vernon, Mrs George Vernon (1663-1710) by John Riley (London 1646 – London 1691). Inscribed bottom left, ‘Katherine Daughter to/Sir Thomas Vernon/Third Wife to George Vernon Esqe’. A three-quarter length portrait, gazing at the spectator, wearing a yellow satin dress and a blue cloak with a silver fringe which she holds against her body with her left hand. Her sleeves are looped up with large pearls and she is seated by a fountain in the form of a shell behind her to the left. She is holding in her right hand a shallow cup, which rests on her lap and there is a classical relief behind her in the background. A scarlet drape behind her head is drawn back to reveal a distant sky. Catherine was the third wife of George Vernon (the builder of the hall), mother of Henry Vernon (George's heir) and was the daughter of Sir Thomas Vernon. Payment made to Riley by George Vernon on April 9, 1681 for 'mine, my wifes and Ant Yardes' (portraits).