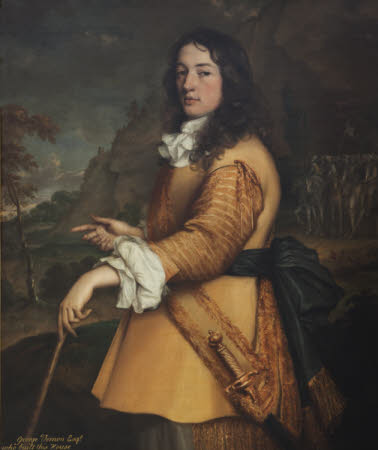 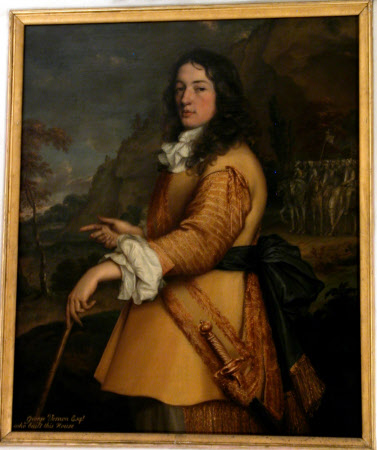 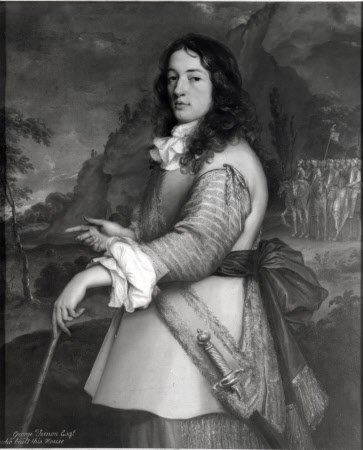 George Vernon is the pivotal figure for the building of Sudbury Hall; something which became the focus of his entire adult life. The background of the painting symbolises George’s commitment to the royalist militia. By March 1660 George was a commissioner for the militia in both Cheshire and Derbyshire.

Oil painting on canvas, George Vernon (1635/6-1702), the Builder of Sudbury Hall by John Michael Wright (London 1617 - London 1694), circa 1660 A three-quarter-length portrait of George Vernon of Sudbury, later inscribed ‘George Vernon Esq Who Built this House’. It is set into panelling in the Saloon above the doorway from the Great Staircase Hall. He is wearing a laced buff coat, with a fringed baldric worn diagonally over one shoulder to carry his sword. The coat and baldric are identical to those in Wright’s 1659 portrait of Colonel the Honourable John Russell. The background includes a small mounted troop with lances and banners. George is holding a cane in his left hand, his right hand is extended forward. He is standing in a landscape, with mounted troops in full armour in the background on the right and a distant view of hills, trees and sky to the left.

Documented in George Vernon's accounts 1659-1660; Vernon collection transfered from the Treasury to the National Trust on the 30th October 1984.