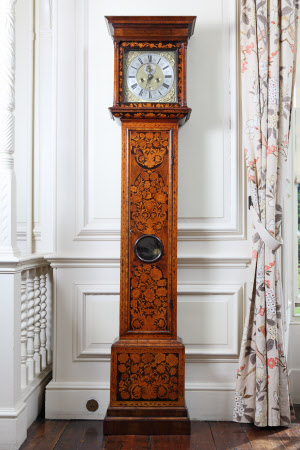 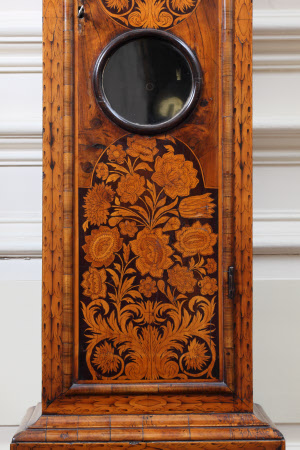 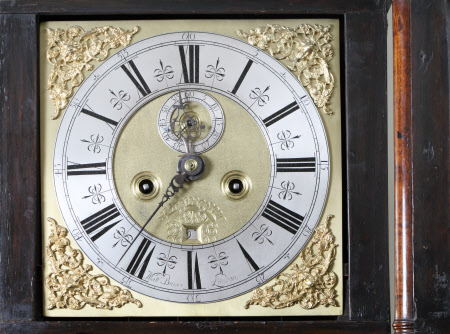 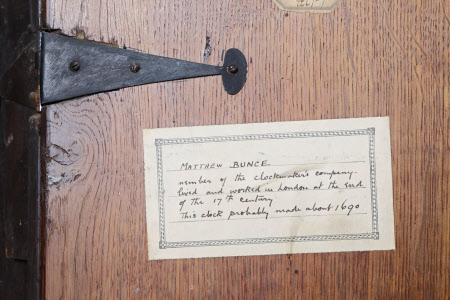 An eight-day walnut and marquetry longcase clock, Matthew Bunce, London, circa 1700, 10¾-inch square brass dial signed Matt. Bunce, with scroll and coronet engraved date aperture, ringed winding holes and subsidiary seconds dial; the bell-striking movement with internal countwheel, anchor escapement and knopped pillars, in wheat ear bordered, floral and bird panelled case, previously with rising hood, and lacking fret, 7ft ¼in / 2.14m high. N.b. Matthew Bunce was apprenticed in London for seven years from 1690 to a maker called John Benson. He’s known to have married in 1698 and taken on an apprentice the following year, but no further record of him has yet been found. Therefore, he very possibly died soon after making this clock. This very complicated form of inlay called marquetry may have come to England from Holland. It was particularly popular circa 1680 – 1710, and its design became busier as time moved on, developing into types known as seaweed and arabesque. Marquetry is distinct from its earlier form, parquetry, in that the latter is of simple, bold geometric shapes.