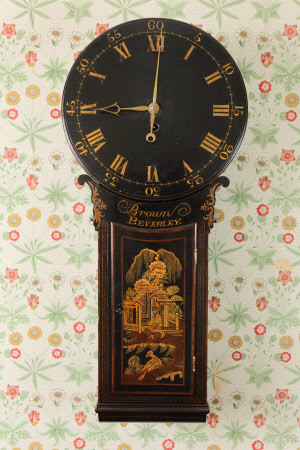 A Black Lacquered Tavern Timepiece, George Brown, Beverley, circa 1775, 18-inch circular wood dial with gold painted numerals and pierced brass arrow-form hands; eight-day weight driven movement with tapered plates, intermediate wheel and anchor escapement; in trunked case with shaped ears, cyma reversa base and signed Brown Beverley over concave top trunk door, 3ft 6½in / 1.08m high. Tavern clocks were made for about a century from the 1730s onwards, although their style did evolve over time. This one has survived well as its ears and base are still intact; the former have often been snapped off, while the heavy weight sometimes smashes through the shaped base leading to its being replaced by something of the wrong style. Tavern clocks are often called Act of Parliament clocks after the 1797 act which taxed clocks and watches. However most, including this one, were made long before it. The Act imposed a duty of 5s on clocks, 10s on gold watches and 2s 6d on silver ones. This was hugely unpopular and led to people hiding or scrapping their clocks and watches to avoid payment. Consequently, people relied on public clocks in places such as taverns to know the time, and hence the name. Fortunately the Act was repealed after only nine months - to the great relief of clock and watchmakers whose trade had suffered heavily.