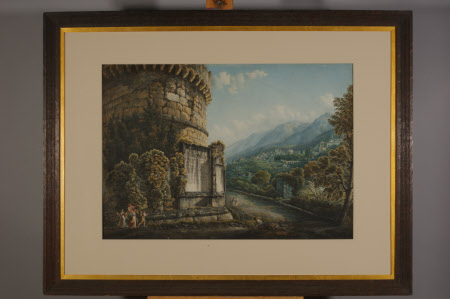 Watercolour heightened with white over an etched outline on paper, The Tomb of the Plautii by Abraham Louis Rodolphe Ducros (Yverdon, Switzerland 1748 – Lausanne 1810). The Early Imperial Tomb of the Plautii (whose upper parts were constructed in the Middle Ages) stands beside the Ponte Lucano (named after Lucanus Plautius) over the River Aniene, on the Via Tiburtina from Rome to Tivoli. Piranesi made two etchings of it: one, in stark contrast to this one, showing it at the end of the Ponte Lucano – a view that Ducros also painted, but showing the river and a verdant landscape setting (Musée Cantonal des Beaux-Arts, Lausanne, Inv.818; c.f. exhibitiion catalogue Images of the Grand Tour: Louis Ducros 1748-1810, Kenwood, &c., 1985-6, no.23; illustrated in colour in Ducros: A Swiss Painter in Italy, National Gallery of Ireland, Dublin, 2003, no.23). A virtually identical version to the latter is at Stourhead. A watercolour, virtually identical but for a pool of water and different vegetation on the right, was auctioned at Phillips, 8 December 1993, lot 130, advertised as “The tomb of Metellus”, catalogued as “The Tomb of Cecilia Metella”, paired with an unusual view of Tivoli from another direction, also with an Antique monument in the right-hand foreground. A related gouache measuring 26 x 40 ins. (?) is at Ugbrooke (collection of Lord Clifford of Chudleigh)