Self-portrait in Vandyke Dress at his Easel 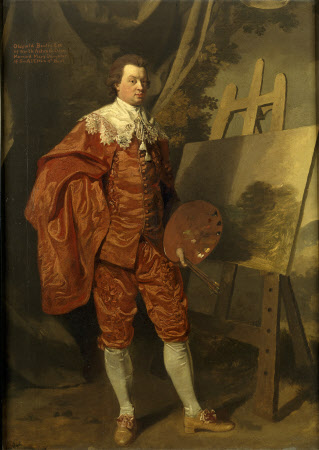 Oldfield Bowles was a patron, an amateur artist - taught by Thomas Jones, pupil of Richard Wilson - and a musician. Here he is seen standing, palette and brushes in hand, in front of his easel, with a landscape painted on the canvas. Many 18th-century artists and connoisseurs are depicted in the type of dress the great artist, Van Dyck, would have worn the century before, as an emulation to him but it also, perhaps, displays ambition and vanity. However, Bowles did not live too extravagant a lifestyle. On his death, the landscape painter and diarist, Joseph Farington (1747 – 1821) wrote: “I have seldom seen a life passed with so much felicity.” He married, as his second wife, Mary, daughter of Sir Abraham Isaac Elton 4th Bt (1718-1790) and Elizabeth Reed (1725-1755) about the time he painted this self-portrait.

Oil painting on canvas, Self-portrait in Vandyke Dress at his Easel by Oldfield Bowles (1739- Hampshire 1810), circa 1770. A portrait of Bowles, as a young man, full-length, turned slightly to the right, looking to the right, in a short brown wig and wearing reddish silk 'Van Dyck' costume, with large lace collar covering his shoulders, white silk stockings and cream shoes with bows. He stands with his right hand on his hip and his left hand holding a paint palette and brushes. He stands before an easel on the right, on which is a landscape. A large drape is hanging from a tree on the left, with a distant landscape on the right. Bowles married Mary Elton (b.1749) the daughter of Sir Abraham Isaac Elton, 4th Bt (1718-1790) and Elizabeth Reed (1725-1755).

Clevedon Court, The Elton Collection (National Trust); accepted in lieu by HM Treasury and transferred to The National Trust in 1998