Chivalry dying of Love for the Goddesses 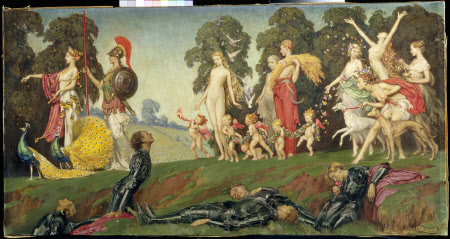 Five dying or dead young men, dressed in full black armour without their helmets, are lying in a ditch. Alongside them is a procession of Roman goddesses bearing their attributes: Juno with two peacocks; Minerva in helmet and breastplate, carrying a spear; a nude Venus accompanied by doves and winged cherubs; Ceres, a corn- sheaf on her shoulder and a sickle at her waist; her pale daughter Proserpina, having spent years underground; Flora, sprinkling flowers; Diana, with two greyhounds; Iris, her arms akimbo; and Hebe pouring wine into a goblet. The artist specialised in allegorical painting. She had a studio opposite Leighton House in Holland Park and was a friend of Byam Shaw whose school she taught at from its foundation in 1911. She lived through the three major wars and with this in mind, it is not difficult to imagine the ditch as a trench and the goddesses as symbols of patriotism and sacrifice.

Oil painting on canvas, Chivalry dying of Love for the Goddesses by Eleanor Fortescue Brickdale (1871-1945). A mythological scene composed of five dying or dead young men lying in a ditch in the foreground, all dressed in full black armour without their helmets, on an embankment, which runs from left to right in the middle foreground is a procession of goddesses. First Juno with two peacocks, followed by Minerva in helmet, breastplate and helmet carrying a spear, followed by a gap in the landscape with a distant view and then a naked Venus with doves hovering over her head and surrounded by six winged cherubs the first blowing a shell horn the other holding up a garland of flowers, she is followed by Ceres carrying a sheaf of corn on her shoulder and a sickle tied to her waist, accompanied by her very pale daughter Proserpina. They are followed by Flora sprinkling flowers before her then Diana with two greyhounds and beside her a figure of a naked female with arms outstretched flying into the air [?Iris], the procession is completed with Hebe pouring wine into a goblet. All the figures are seen against a background of trees. The dying soldiers could also refer to those who became flowers at death like Ajax, Narcissus, Hyacinth, Adonis and Crocus.

Clevedon Court, The Elton Collection (accepted in lieu by HM Government and transferred to The National Trust in 1998)