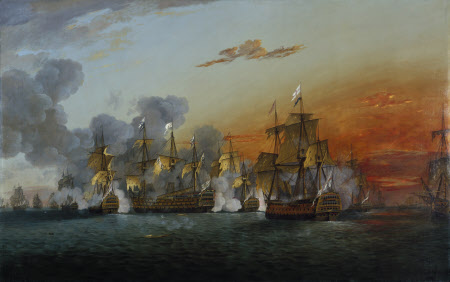 This battle picture is one of four that depict episodes in The American War of Independence in which Admiral Rodney played a prominent role by defeating the French and Spanish fleets who were supporting the rebellious American colonists. The victory earned Rodney his peerage

Oil painting on canvas, The Battle of the Saints, 12th April 1782, 6.30 pm, The ‘Ville de Paris’ striking her Colours by Thomas Luny (London 1759–Teignmouth 1837), signed on a spar, bottom left: T. Luny.1785. The Ville de Paris, flying the St. Andrew’s Cross and [? – a white rectangle within blue borders], is running up the white flag, flanked by two British warships, the Namur and the Canada. Rodney’s flagship, the Formidable, astern of them.

This, the two other pictures by Luny, and the copy of Paton’s painting, were acquired with the house when it was bought from Lord Rodney by the 1st Lord Cawley in 1900. (For further details, see Country Life, CXVI, December 1954, p.2182). Accepted in part-payment of death-duties in 1954 and transferred to the National Trust in 1959.