attributed to Gillows of Lancaster 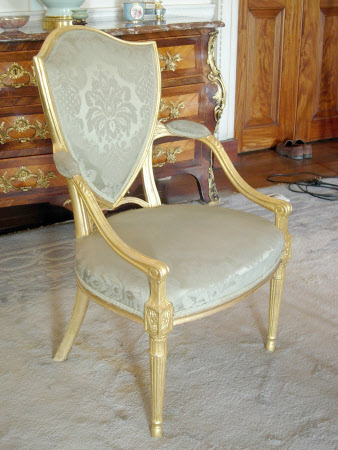 A giltwood open armchair, English, circa 1780. Attributed to Gillows. Upholstered in silk damask, the shield-shaped back resting on a pair of arched brackets, the moulded and deeply inswept arms with small padded elbow rests, the bowfront seat raised on reeded tapering legs head with floral paterae. The top rail of the chair unusually curves over backwards in an exaggerated way.

Chairs of this design, know as a 'French cabriole' chair, were produced from the early 1770's by the Lancaster firm of Gillow, who opened a shop in London and were one of the leading cabinet makers in Britain. A pair of chairs (from a set of four) of closely similar design are illustrated in S. Stuart Gillows of Lancaster and London 1730-1840, Vol II, ACC 2008, p.181, plate 147, which were sold at Christie's New York, 22 April 1999, Lot 76, one of which is inscribed in pencil R Gillow and the (work) number 1343. They closely resemble the pattern for the set of ten chairs ordered from Gillows by Robert Peel Esq. in 1786 and recorded in their Estimate Sketch Book of that year, also illustrated in Stuart's book on p.181 as Plate 146. A suite of identical design was supplied for William Wyndham Grenville for his country retreat at Dropmore, Buckinghamshire which was built in 1795 by architect Samuel Wyatt. Lord Grenville served as Prime Minister to George III. While there is no documentation concerning the furnishing of Dropmore, a design in the Gillows' Estimate Sketch Books, folio no. 1116, dated 1796, for Grenville allows for an attribution to this firm. Two armchairs from the original set of eight were offered at Sotheby's London, 26 November 2003, Lot 136. The additional unusual feature of the arched brackets supporting the shield-shaped back can also be seen on a pair of chairs offered at Christie's New York, 17-18 October 2012, Lot 590, which in all respects seem identical to the Berrington chair, apart from the fact that the gilding has been removed.

Bequeathed to the National Trust by Mrs C.V. Lawson in 1981.

attributed to Gillows of Lancaster , cabinet-maker