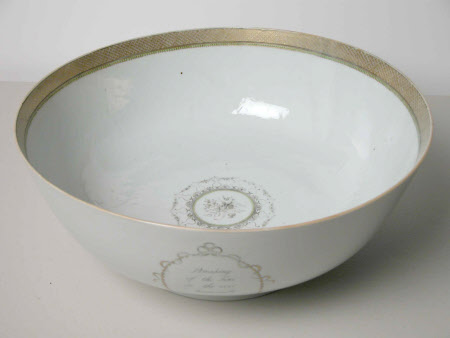 This punch bowl celebrates Admiral Rodney’s victory at the Battle of les Saintes in 1782. The battle established “Breaking the Line” as an important Naval tactic, one that was subsequently used by Admiral Nelson at the Battle of Trafalgar.

Punch bowl, porcelain, inscribed ‘Breaking the line on the ever memorable 12th April [1782]’, painted in grisaille (black enamel) with ships, Chinese, enameled in Canton, c. 1785 Gift of Michael Croft (1916–1997), 2nd Baron Croft of Croft Castle, Herefordshire (NT), 1984. This punch bowl commemorates the successful ‘Battle of les Saintes, April 12th 1782,’ fought in the West Indies during the War of American Independence. Admiral Lord George Brydges Rodney (1718-92) commanded the British Fleet against the French commanded by the comte du Grasse (1722-1788). The battle established “Breaking the Line” as an important Naval tactic, in which the British ships passed through a gap in the French line of battle (aided perhaps by the weather), engaging the enemy from leeward and throwing them into disorder. There is some controversy over under whose direction it was made, Rodney or Sir Samuel Hood. Nelson used the same tactic at the Battle of Trafalgar 23 years later. Note the actual bowl owned by the Rodney family, sold in 1906, is now in the National Maritime Museum, Greenwich.(AAA4358)

Given by Lord Croft to Berrington in 1984 in commemmoration of Lord Rodney's sea battle.

'Breaking the line on the ever memorable 12th April'