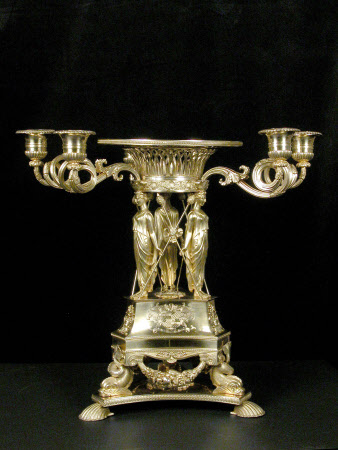 William, 3rd Lord Berwick was responsible for the huge silver collection at Attingham. It was a perk of his ambassadorial job to be able to keep this silver dinner service. The aim of it was to reflect the status of its owner and that of his nation as a whole.

Silver-gilt centrepiece candelabra with branches for six lights joined to an openwork basket and pierced vine border. Supported on three female caryatid figures, engraved plinth on dolphin feet joined by swags of fruit and flowers. Triangular base on shell feet. Manufactured by Paul Storr in 1814 as part of William Hill, 3rd Lord Berwick's ambassadorial dinner service. The diplomatic plate was supplied to William Hill in his role as Ambassador, by the Royal Goldsmiths firm of Rundell, Bridge and Rundell, which employed many of the most notable goldsmiths and silversmiths of the 19th century, including Paul Storr who managed their workshop in Dean Street, London from 1807 until 1819.

3rd Lord Berwick collection: William Noel-Hill, 3rd Baron Berwick (1773-1842). Acquired by the 3rd Lord Berwick, who had been in Italy as British Envoy and Ambassador to the Kingdom of Naples and the Two Sicilies. By descent bequeathed to the National Trust with the estate, house and contents of Attingham by Thomas Henry Noel-Hill, 8th Baron Berwick (1877-1947) on 15th May 1953.