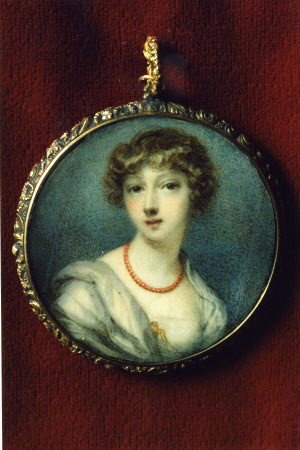 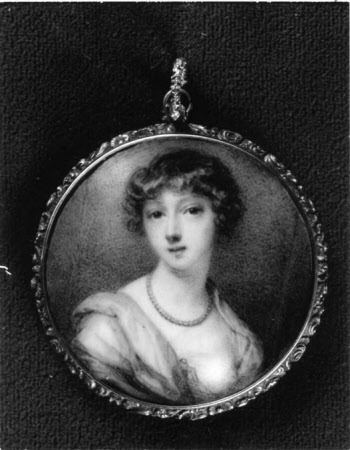 Was Sophia just another object in 2nd Lord Berwick’s collection? This miniature is the only image of Sophia at Attingham. After her husband’s death, she gave instructions for the paintings of her by Lawrence and Beechey and a bust by Nollekens to be sold.

Portrait miniature, watercolour on ivory of Sophia Dubochet, Lady Berwick (1794-1875) by Richard Cosway RA (Tiverton, Devon 1742 - London 1821), circa 1812. Circular. Head and shoulder portrait turned to the right, head tilted to left, wearing a coral necklace and a white cloak over her left shoulder. Brown eyes, short brown hair and pink complexion. Plain grey background. In an embossed gilt metal case with a coil of brown hair in the back. Sophia Dubochet, wife of 2nd Lord Berwick married in 1812 as a minor. Her youthful appearance in the miniature suggests that this may be a marriage portrait. It was said that Lady Berwick pleaded with Cosway to paint her portrait. Having already given up painting miniatures Cosway agreed 'declaring that it would be the last which he would to able to complete'.