A Herm of Pan adorned by Nymphs (after Angelica Kauffman) 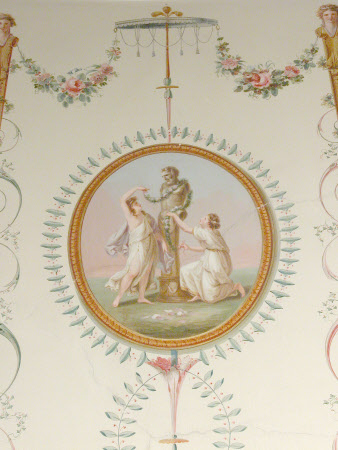 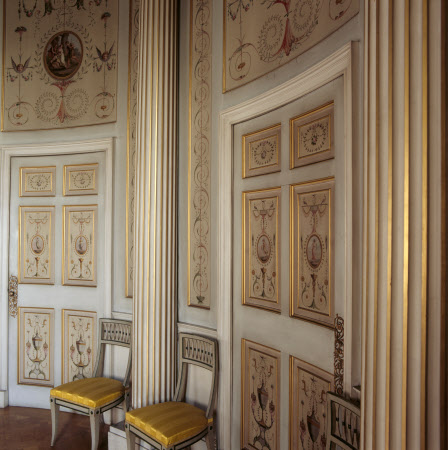 This roundel depicts two nymphs placing a garland of flowers around a pillar of Pan. It is part of a larger decorative scheme in the painted boudoir at Attingham Park. Built between 1782-5 for Noel Hill, 1st Lord Berwick, Attingham was designed by George Steuart – a former assistant and rival of Robert Adam – who devised the symmetrical plan of matching suites of rooms of increasing intimacy on either side of the entrance hall: Lord Berwick’s wing to the left and Lady Berwick’s wing to the right. The boudoir is the last and most intimate of the rooms in the female wing of the house. The theme of the decoration in this circular room is Love, which is not insignificant. The 1st Lord and Lady Berwick, perhaps unusually for their time and social standing, married for love. Lady Berwick was not an heiress and Lord Berwick’s family objected to the match. This subtly painted scene is attributed to the French artist Louis-André Delabrière. His panels, along with the doors and ceiling of this room, are among the most delicate schemes of late 18th-century decoration to survive in this country. They are based, in part, on designs by the Swiss-born but Italian-trained Angelica Kauffman, who arrived in London in 1766 to social and artistic acclaim. Over the past century, the term ‘boudoir’ has developed risqué connotations, but there was nothing lewd about this room during the 1780s when it was created. The boudoir, and Delabrière’s decorations in it, represented the pinnacle of aristocratic sophistication and feminine taste. Marie Antoinette had a similar painted boudoir at Fontainebleau, France.

Oil painting on plaster, A Herm of Pan adorned by Nymphs (after Angelica Kauffman) by Louis-André Delabrière, circa 1785. A painted oval, a herm of Pan dressed with garlands by two nymphs. Floor strewn with flowers in foreground. Painted after an engraving of Angelica Kauffman's designs by William Wynne Ryland which is inscribed with the first lines of the satire by Horace ((I,viii): 'Olim truncus eram ficulnus inutile lignum’ (Once I was the trunk of a fig-tree). This design also appeared in 1775 as part of the Duke of Northumberland’s elaborate ‘glass’ drawing-room at Northumberland House, which was designed by Robert Adam. Painted in roundel above fireplace, gilt surround.