Christ expelling the Money Changers from the Temple 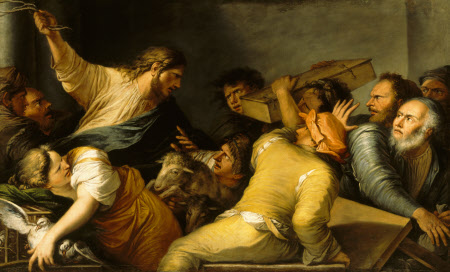 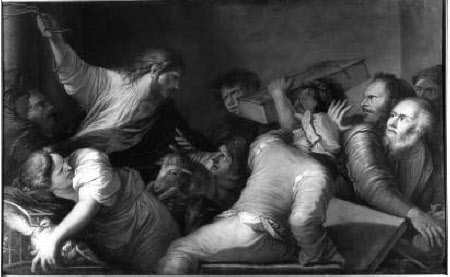 The scene is taken from the New Testament in The Bible. On seeing that the Temple in Jerusalem had been turned into a market place by money-changers and traders, he was infuriated, and drove them out. He holds a makeshift whip of cords with which to chase them. It was for this kind of ‘history painting’ that Rosa aspired to be known, rather than for his romantic landscapes and banditti (characterisations of bandits, usually set within a landscape). This picture appears to have been bought by the 3rd Lord Berwick from the palazzo of the marchese Nicolò Cattaneo Grillo dal Portelle in Genoa. It is coarsely painted so was probably always intended to be seen at a distance.

Oil painting on canvas, Christ expelling the Money Changers from the Temple by Salvator Rosa (Arenella, Naples 1615 – Rome 1673), signed on table-leg at right: SR (monogram), 1660s. A group of half-length figures, Christ wearing a white robe and blue cloak, his arm raised, brandishing a rope and facing a confused crowd. On the left a woman with caged birds, a man with goat stands next to her.

Appears to have been bought by William Noel-Hill, 3rd Lord Berwick (1773-1842) from the marchese Niccolò Grillo-Cattaneo dal Portelle in Genoa [in Lady Morgan's 1824 biography of Rosa as in the Palazzo Cattaneo, Genoa]- first item in the undated list of Qadri esistenti nel Palazzo del Sigr Marchese Nicolo Cattaneo Grillo dal Portelle [Genoa], as “Cristo che caccia: Giudei dal Tempio di Salvator Rosa” and with highest valuation 3,000 [lira?]; This picture or a copy (?) - later in bill of lading of William Noel-Hill, 3rd Lord Berwick (1773-1842) [from Naples; which is that of his final return from Naples to England in 1833] in Cassa F, no 3; “Cristo, che caccia li venditori dal Sagro Tempio, a ½ fig. grande al naturale pal. 8 p.5 ad imitazione di Sal Rosa.”; in 1847 Catalogue of Paintings, p.22; 'Heirloom' 1947 Probate Valuation no.81; bequeathed to the National Trust with the estate, house and contents of Attingham by Thomas Henry Noel-Hill, 8th Baron Berwick (1877-1947) (1953) on 15th May 1953.