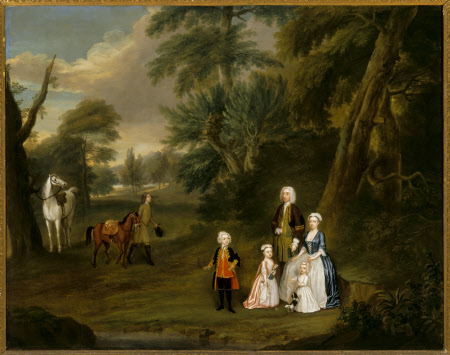 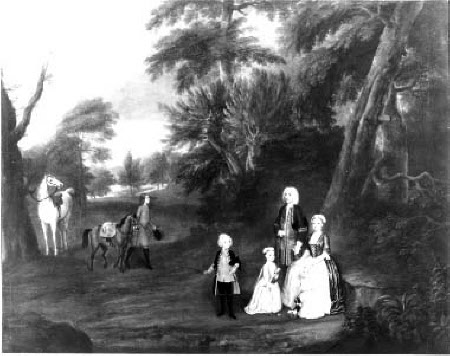 Thomas Hill (Harwood) (1693-1782) is here shown with his first wife, Anne Powys (d.1739). He assumed the name Hill on inheriting property from his uncle, Richard Hill. Typically for the times, eight of the children of this first marriage died young, including his beloved first great dynastic hope, ‘pretty Dick’ (1723-1734), shown here. Also represented are his daughters, Anne Hill (1726-1771) and Margaret Hill (1729-1767), who became Countess of Harborough. It was his son Noel (1745-1789), by his second wife, Susanna Maria Noel (d.1760), who remodelled their house, Tern, in the 1780s into the grandiose Attingham Park we know today. He also brought a peerage into the family, becoming the 1st Lord Berwick. The portrait shows the family as wealthy landowners, with the father’s horse tethered beyond, and the son’s being led on by the groom. Young Richard holds a whip in readiness for his ride, but his exquisite dress suggests otherwise.

Oil painting on canvas, Outdoor Conversation Piece of Thomas Hill (Harwood) (1693-1782) and his First Family by Charles Phillips (London 1708 - London 1748), signed and dated, lower left: CPhilips: pinxit / 1730 [CP joined]. Thomas Hill (Harwood) (1693-1782), his wife, Anne Powys (d.1739), his son Richard Hill (1723-1734), his daughters, Ann Hill later Mrs Burton (1726-71) and Margaret Hill, later, Countess of Harborough (1729-1767). Full length portrait of figures to right, grouped together beneath a large tree, in a woodland setting, left to right, young boy wearing a red waistcoat young girl dressed in pink with white apron, man in white wig, dressed in brown with green waistcoat embroidered in gold, woman, seated dressed in blue with white apron and in front of her a young girl dressed in white, a small dog in front of her with its front paws raised on her dress; in a clearing to the left is a grey horse tied to a tree on the far left, the horse is facing forward with its head turned to the right, to the right of the horse a groom leading a bay pony, advances towards the group to the right, distant landscape perspective to left, with a river, trees and a cloudy sky.