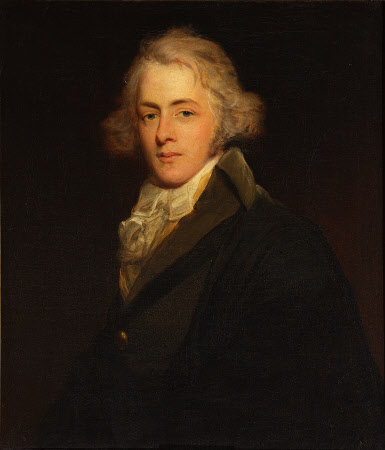 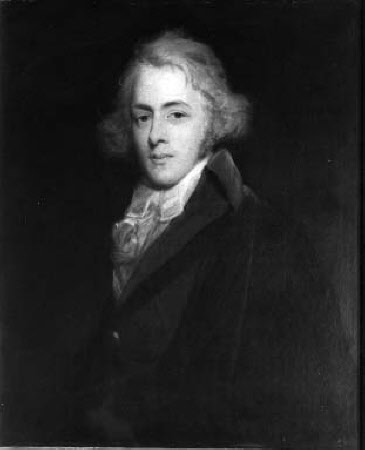 Lord Berwick married Sophia Dubochet (1794-1875), daughter of John James Dubochet, when she was only eighteen. They had no children and the barony passed to his younger brother William Noel Hill, 3rd Lord Berwick(1773-1842). After his Grand Tour, Lord Berwick had already amassed a considerable collection of pictures and was contemplating alterations to the house in order to hang them. By 1827 his extravagance forced him to sell the complete contents of Attingham, which included all the pictures, except for family portraits. It is not certain whether this portrait is by Romney, but the sitter appears in Romney’s Diary in 1792 and 1795.

Oil painting on canvas, Thomas Noel-Hill, 2nd Baron Berwick of Attingham, FSA (1770-1832) by George Romney (Dalton-in-Furness 1734 – Kendal 1802), circa 1795. A half-length portrait of the son of Noel Hill, 1st Baron Berwick of Attingham and Anna Vernon, as a young man, turned to left, wearing a dark olive green coat with velvet collar and white cravat, a cloak over his left shoulder, with powdered hair. The sitter's name appears in George Romney's Diary in 1792 and 1795. He married Sophia Dubochet, daughter of John James Dubochet, on 8 February 1812 at St Marylebone Church, Marylebone, London, England. He died on 3 November 1832 at age 62 at Naples, Italy, without issue. He was buried at Naples, Italy. His will was probated in August 1833. He succeeded to the title of 2nd Baron Berwick of Attingham,on 6 January 1789. He was educated at Cambridge University, Cambridge, Cambridgeshire, England. He was invested as a Fellow, Society of Antiquaries (FSA) on 4 June 1801. He travelled extensively in Italy, and while he was in Rome with Edward Clarke the latter recorded that “Lord Berwick is employing Angelica Kauffmann in painting and I am now selecting passages from the poets for her to paint for his house at Attingham.” .. ' he has left me to follow my own taste in painting and sculpture. I have ordered for him two superb copies of the Venus de Medici and the Belvedere Apollo [from John Deare?] as large as the originals. ..... In painting, I have selected two passages from Euripides, to be executed by Grignon; Freedom, from Chatterton's Ode, by Angelica Kauffmann; his portrait [m.u.], and another allegorical painting by the same artist .....” (William Otter, The Life and Remains of Edward Daniel Clarke, 1825, vol.I, pp.131-32). By 1794 when he returned to England with Clarke he had already amassed a considerable collection of pictures and was contemplating alterations to the house in order to hang them. By 1827 his extravagance forced him to sell the complete contents of Attingham, and this included all the pictures except for family portraits. Picture sales took place at Christie's, 17 and 30 November and 1 December 1827 and by Robins (Contents of Attingham) on 30 July. The extent of his collection, which was catalogued anonymously ('Property of a gentleman lately bought from a palace in Italy .... who has resided thirty years in Italy') can be seen from the fact that the sales at Christie's alone comprised 326 lots.

2nd Lord Berwick collection; bequeathed to the National Trust with the estate, house and contents of Attingham by Thomas Henry Noel-Hill, 8th Baron Berwick (1877-1947) and transfered on 15th May 1953