The Excavations at Pompeii 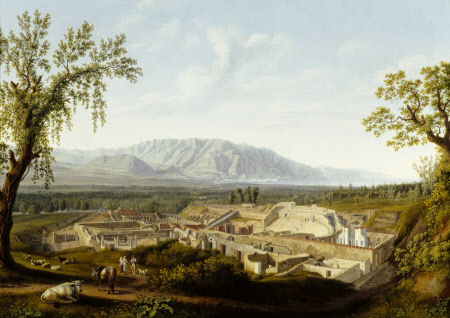 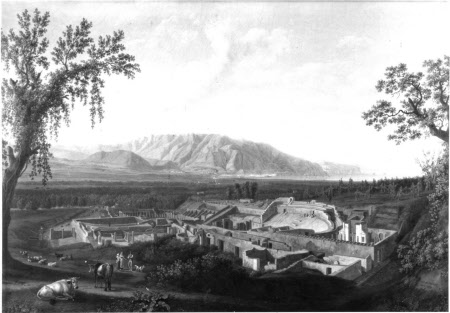 Oil painting on canvas, The Excavations at Pompeii by Jakob Philipp Hackert (Prenzlau 1737 – San Piero di Careggi 1807), signed bottom right: Filippo Hackert dipinse 1799. A view to the south-west excavations at Pompeii, from higher ground, looking down upon the partially excavated ruins, with the Sorrentine peninsula in the distance. Companion to The Lake of Avernus. The artist probably finished the work in Pisa as he had to flee Naples during the Napoloeonic invasion and the pair were probably purchased during the peace of Amiens in 1802 by Thomas Berwick (rather than commissioned).

Probably commissioned by the King of Naples in 1797 for Thomas Noel Hill, 2nd Lord Berwick (1770-1832) after his visit and bought in 1802; his [bankcruptcy] sale, Robins (Warwick House, Regent Street), Attingham, 30 July ff. 1827, 6th day (6 Aug), lot 55 bought in at 52 gns by Tennant [possibly in competition with Mr Watson, John Soane's agent, who had expressed interest in the pair as indicated in his catalogue of the sale] acting on behalf of William, later Lord Berwick (1772 - 1842), as one of the pair, together valued at £100 [whose accompanying note reads: “From the first to the last I have invariably said I wished to have the Hackerts and Denis’s if possible, the last words and continually repeated to Mr Smithkin were not to go upon a principle of division as it would be endless..."]; thence by descent; bequeathed to the National Trust with the estate, house and contents of Attingham by Thomas Henry Noel-Hill, 8th Baron Berwick (1877-1947) on 15th May 1953.