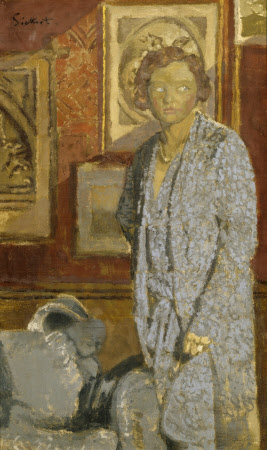 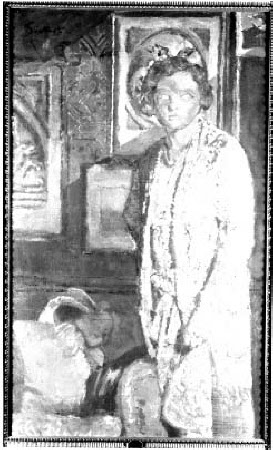 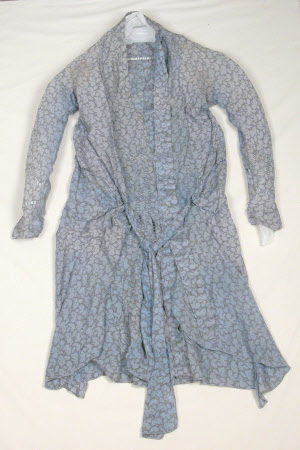 Edith Teresa Hulton, Lady Berwick (1890-1972) was the daughter of William Stokes Hulton (1852-1921) and Costanza Mazini, who lived in the Palazzo Donà, Venice. Her father was a painter, whose artist friends included Sickert and Sargent, whilst her mother was half-Italian and brought links with the literary and artistic community of Florence. In 1919 Teresa married Thomas Henry Noel-Hill (1877-1947), 8th Lord Berwick, while he was serving in Italy during the First World War. Teresa had worked with the Italian army throughout the war, receiving the Croce di Guerra for her service. Sickert was a friend of the family, who used to paint with her father in Venice. Teresa and her sister went to Sickert’s studio in Barnsbury Park, where he took photographs from which he worked. The final painting was called ‘Lady in Blue’. Teresa said that ‘no one would call it a portrait, it is a fantasia in a characteristic subdued colour scheme’.

Oil painting on canvas, ‘Lady in Blue’ (Edith Teresa Hulton, Lady Berwick) by Walter Richard Sickert, RA (Munich 1860 – Bathampton 1942), signed, upper left: Sickert, 1933/34. A three-quarter-length portrait, standing, right turned to left, head facing, wearing a blue figured dress and coat, short hair, her right hand on her hip, beside an armchair with blue cushions in an interior hung with paintings. The sitter was the daughter of William Stokes Hulton (1852-1921) and Costanza Mazini (1863–1939). She married Thomas Henry Noel-Hill, 8th Baron Berwick of Attingham (1877-1947) on 30 June 1919. Painted from photographs the artist took, Lady Berwick wrote: "No one could call it a portrait, it is a fantasia in a characteristic subdued colour scheme. Both pictures had narrow gilt frames and were signed by Sickert at the Alvaston Place flat on 10 January 1934." The silk crepe dress which Lady Berwick wore for this portrait (printed in grey and grey blue with a scattered leaf design) was described by her as 'Blue Summer Dress'. It was made in Florence in 1930 and is still in the costume collection at Attingham Park.

Given to Lady Berwick by the artist in 1934; bequeathed to the National Trust by Edith Teresa Hulton, Lady Berwick (1890-1972)