Landscape with a Bridge, with a View of Monte Sarchio 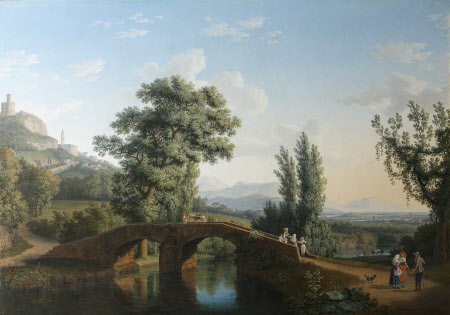 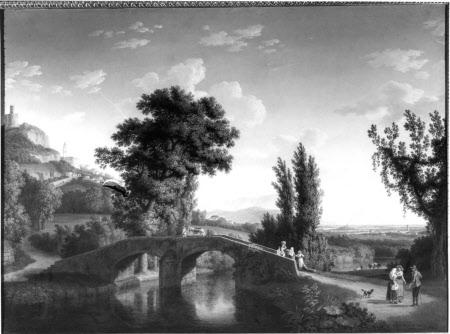 This picture was acquired by William Noel-Hill, 3rd Baron Berwick (1773-1842) when he was minister at the Court of Naples. The picture is signed and dated 1797, by which time Hackert had moved from his native Germany, and had become Court Painter in Naples for King Ferdinand IV. Hackert’s style encompassed aspects of seventeenth century Dutch landscape painting, and the mood of Claude Lorrain. Monte Sarchio, now called Montesarchio, was a small town in Campagna, Italy, which lay between Naples and Benevento. The finished drawing on which this painting is based is at Stourhead (National Trust).

Oil painting on canvas, Landscape with a Bridge and a View of Monte Sarchio by Jakob Philipp Hackert (Prenzlau 1737 – San Piero di Careggi 1807), signed and dated Filippo Hackert dipinse 1792. A landscape view with double-arched bridge in foreground, figures on a path, in the background a castle on a hill in distant landscape. The original drawing for this painting is at Stourhead and a first painting, signed and dated 1791, and half the size, was acquired by the Hermitage Museum in St Petersburg in 1969.