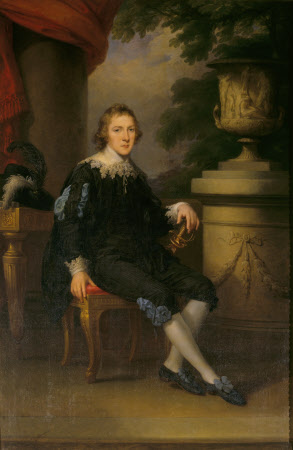 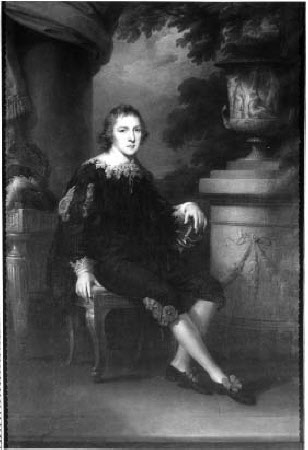 The youthful sitter of this portrait is Thomas Noel-Hill, 2nd Baron Berwick, who inherited Attingham in 1789, aged 19, and soon embarked on a Grand Tour of Italy where he acquired a taste for works of art and extravagant spending. While in Rome, he chose the acclaimed Swiss-born, Italian-trained artist Angelica Kauffman to paint his portrait. After a fêted career in London which culminated in becoming a founder-member of the Royal Academy, she returned to Italy where she continued to enjoy international patronage. Whilst the background to the painting depicts a typical classical scene, Berwick’s outfit is deliberately archaic. His cavalier frills and slashed silk sleeves recall the work of the 17th-century Flemish Baroque artist and leading court painter of England, Anthony van Dyck. Costumes in the van Dyckian style were in vogue among the elite in the mid-18th century, offering opportunities to flaunt wealth and glamour. Angelica Kauffman recorded in her Italian notebook that Lord Berwick paid 220 ‘zecchini’ (gold coins) for the portrait. In 1794, when he finally returned to England, Berwick had already amassed a considerable collection of pictures and was contemplating alterations to Attingham in order to hang them. Eventually, Lord Berwick ran out of money and by 1827 his profligacy forced him to sell the complete contents of Attingham, including all the pictures save the family portraits - which is why this painting by Kauffman survives.

Oil painting on canvas, Thomas Noel-Hill, 2nd Baron Berwick of Attingham, FSA (1770-1832) by Angelica Kauffman RA (Chur 1741 – Rome 1807), signed and dated: Angelica Kauffmañ Pinx: Romae 1793. A full-length portrait of Thomas Noel-Hill, as young man seated on stool, wearing Van Dyck dress of black silk, white lace collar and cuffs, slashed blue sleeves, blue rosettes at knees and shoes, his left hand on sword. Pedestal and urn to right, column and curtain behind. He was the son of Noel Hill, 1st Baron Berwick of Attingham and Anna Vernon and married Sophia Dubochet, daughter of John James Dubochet, on 8 February 1812. He died on 3 November 1832 in Naples, Italy, where he was buried, without issue. He travelled extensively in Italy, and while he was in Rome with Edward Clarke, the latter recorded that 'Lord Berwick is employing Angelica Kauffmann in painting and I am now selecting passages from the poets for her to paint for his house at Attingham.” Edward Clarke specifically mentions the commissioning of this portrait in his letter of 5 December 1792, and gives at the same time an idea of the context that it was commissioned in. He goes on, after the passage quoted above: 'he has left me to follow my own taste in painting and sculpture. I have ordered for him two superb copies of the Venus de Medici and the Belvedere Apollo [from John Deare?] as large as the originals. ..... In painting, I have selected two passages from Euripides, to be executed by Grignon; Freedom, from Chatterton's Ode, by Angelica Kauffmann; his portrait, and another allegorical painting by the same artist .....” It is recorded in Kauffamn's Italian notebook that Lord Berwick paid 220 zecchini for the portrait, which was painted in Rome, through Thomas Jenkins, November 1793. He is described as wearing Spanish costume. The next entry, described as painted for [the dowager] Lady Berwick, is for: “Miss Hill, now Lady Bruce, daughter [recte-sister] of the above; life size full half-length figure, attired as a Muse ....”, but which was paid for by Lord Bruce (subsequently 1st Marquess of Ailesbury), and subsequently at Tottenham House, Savernake Forest. By 1794 when he returned to England with Clarke he had already amassed a considerable collection of pictures and was contemplating alterations to the house in order to hang them. By 1827 his extravagance forced him to sell the complete contents of Attingham, and this included all the pictures except for family portraits. Picture sales took place at Christie's, 17 and 30 November and 1 December 1827 and by Robins (Contents of Attingham) on 30 July. The extent of his collection, which was catalogued anonymously ('Property of a gentleman lately bought from a palace in Italy .... who has resided thirty years in Italy') can be seen from the fact that the sales at Christie's alone comprised 326 lots.