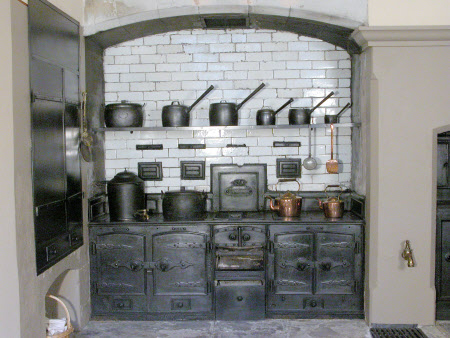 The best in Victorian kitchen technology, this iron range would have transformed the cooking experience. Bricked up during the time of the Adult Education College, this huge object once again has pride of place in the room.

Cast iron built-in cooking range, with four hotplates, three compartments below enclosed by doors marked Closet, Oven and Roaster, central fire compartment, three tiny drawers below. Metal slatted shelf above. Manufactured by Flavel and Company of Royal Leamington Spa, post 1856. This range was bricked up and discovered and restored during the restoration of the kitchen c.1997. Flavel's 'Leamington Kitchener' was an important step forward in kitchen cookers. Already in 1830 it was advertised as having a 'roaster on one side, an oven on the other, a hot plate, hot closets and a cistern'.