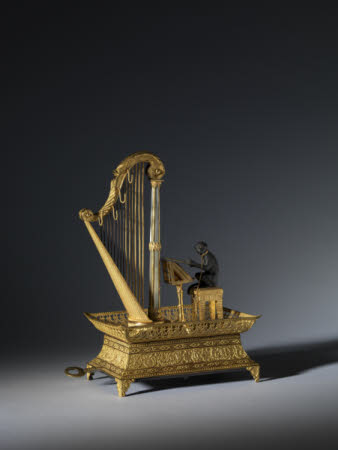 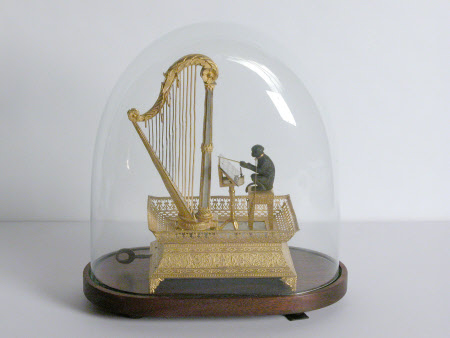 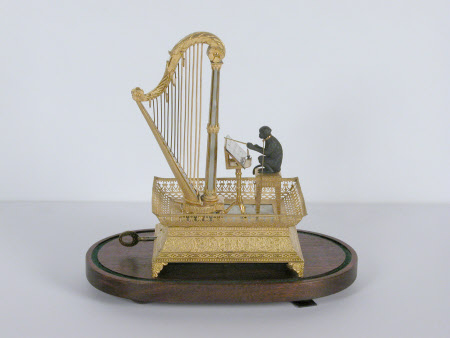 Normally covered by a glass dome, this remarkable Swiss music box consists of a tiny monkey seated in front of a large golden harp and music stand. The monkey is chained to his chair by a gold collar and conducts the music – a melody used by alpine herdsmen to call in their cattle – that is played when the box is wound up. The box is thought to be a wedding present from Thomas, 2nd Lord Berwick (1770–1832), to his wife Sophia Dubochet (1794–1875), and was made in Geneva at a time when the fashion for novel automata was at its height. There was a 24-year age difference between the couple, so while the box may have amused the young bride (who was also provided with harp lessons), it could have been understood, too, as conveying a message about the duty of a new wife to dance to the ‘tune’ of her husband. The extravagant lifestyle of the couple eventually led to financial ruin, and they escaped their debts by leaving Attingham for Naples, where Thomas died seven years later.

Ormolu musical box automaton made by Moulinie Aine and Co. of Geneva, Switzerland, circa 1820. Chained ebony monkey seated before harp and music stand. His head turns as he conducts music with an ivory baton. Sheet music engraved 'Ranz de Vaches Air de Figaro'. Moulinie Aine and Co a Geneve (maker's name engraved on steel sheet music). Chased ormolu mounts to mother-of-pearl base. Housed in its original glass dome with oval wood base. Traditionally believed to be a gift to Sophia, wife of the 2nd Lord Berwick.

This exquisite Swiss music ‘box’ is actually an automaton with an intricate mechanism that enables the monkey, seated before a harp and music stand, to turn his head while conducting the music with an ivory baton. It is believed to have been purchased as a wedding present in 1812 by Thomas, 2nd Lord Berwick, aged 41, for his wife Sophia Dubochet, aged just 17 and a former courtesan. According to reports at the time, Thomas was awkward in society and had been looking for a wife for some twenty years. Whilst a charming object, it could be interpreted as having disturbing connotations. The music played is an example of a traditional Swiss melody known as a ‘Ranz des Vaches’. Melodies like this were played on horns by Alpine herdsmen to coax their cattle to be milked or to move up the mountains. It is said that, so evocative were these melodies, Swiss soldiers in French regiments were forbidden under penalty of death from singing them, lest the tunes might encourage desertion. One interpretation is that the title of this specific tune, ‘No more gallivanting’, was a controlling message from Thomas to Sophia that her courtesan days were over: the ebony monkey is chained by the neck to its stool and trapped within its gilded, glass world. In other ways the gift was entirely appropriate: Sophia was half Swiss and had access to her own harp with lessons from the famous harpist, Nicolas-Charles Bochsa. Attingham’s fortunes under Thomas and Sophia can be summed up in this one object: beautiful but vulnerable. Under them, Attingham’s Regency interiors were at their height, richly furnished and decorated. But their gilded, fashionable world came crashing down in 1827 as their lavish life-style led to financial ruin. They fled to Naples where Thomas died seven years later. Sophia survived in rented lodgings, having given up most of her possessions, but clung onto her harp stand and stool, dying in Leamington Spa aged 81. The mesmerizing monkey continues to conduct its nostalgic melody at Attingham.