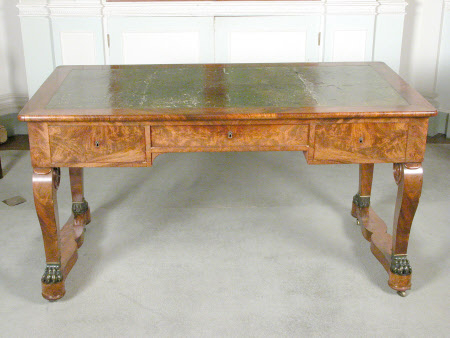 A mahogany writing table, or bureau plat, French, circa 1815 - 1820, bearing the stamp of Antoine-Nicolas Lesage (1784 - 1841), a merchant of the rue Grange-Bateliére, Paris. The rectangulat topped lined with green leather, and with a pair of sliding extensions fitted to the short friezes at each end. One long frieze fitted with three drawers, the right-hand drawer fitted with divisions, a sliding cover and a secret drawer. Raised on four cabriole legs terminating in bronze lion's paw-cast feet with a brass collar at the ankle. Each pair of legs raised on a shaped platform support fitted with brass castors.

Antoine-Nicolas Lesage (1784 - 1841), established in the rue Grange-Bateliére between 1821 and 1837, was one of the most important marchands of his period. He received commissions from the Garde Meuble de la Couronne, the palaces of Saint-Cloud, Trianon and Tuileries as well as the Duchesse de Berry. Four clocks and a stationery casket at Attingham also bear the mark Lesage, either as a retailer or maker.

Attingham collection; listed in the Inventory taken at Attingham in 1913 (p. 87). Bequeathed with the estate, house and partial contents of Attingham by Thomas Henry Noel-Hill, 8th Baron Berwick (1877-1947) and transferred to the National Trust on 15th May 1953.