The daybed of Maria Teresa of Austria-Este, Queen of Sardinia (1773-1832), at Attingham Park 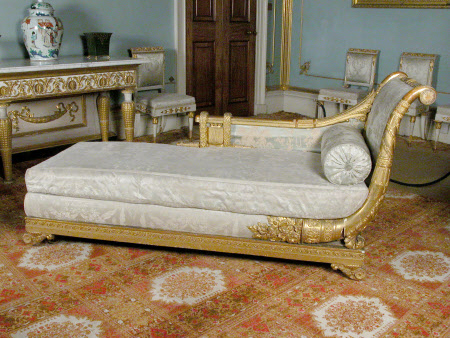 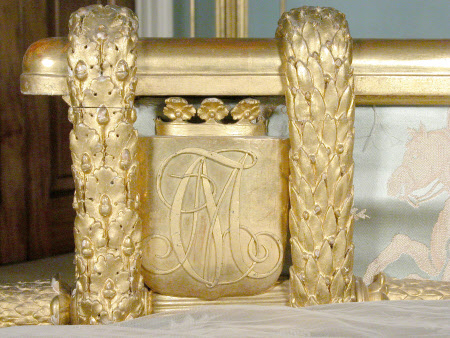 This sumptuous gilded day bed, upholstered in pale green silk, was originally made for Queen Maria Theresa of Sardinia (1773–1832), as indicated by the recently reidentified gilded letters ‘MT’. It was designed for reclining during the day in elegant surroundings, probably in a private boudoir, and was of a type popular for grand interiors in the Napoleonic period. It was probably influenced by the work of Giocondo Albertolli (1742–1839), a Milan-based architect, who developed the designs for furnishing the palaces of Maria Theresa’s father, Archduke Ferdinand of Austria-Este (1754–1806). The bed was brought to Attingham in Shropshire – probably from the Palazzo Tursi, Genoa – during the 1830s by William Noel-Hill, 3rd Lord Berwick (1773–1842), British envoy in Italy, who attended the court of Queen Maria Theresa and her husband King Vittorio Emanuele I of Sardinia (1759–1824). It is not known how Lord Berwick acquired what would have been a personal and intimate piece of royal furniture, but it is possible that it was purchased or offered as settlement of a debt, or was a gift for personal services to the Crown.

A carved and gilded walnut daybed, probably made in Genoa, circa 1814, influenced by the designs of architect Giocondo Albertolli (1742-1839) and his circle, unmarked. Part of a much larger group of North Italian gilded and white-painted furniture at Attingham, but most closely related to a sofa (NT 608161) and two armchairs (NT 608165 and 608173). With one upright, padded end, faced by a support terminating in a cornucopia issuing an abundance of flowers and leaves. The rear arm-rest terminated by a shield bearing the monogram ‘MT’ beneath an open crown topped by three strawberry leaves (originally five) flanked by oblong woven garlands of oak leaves and acorns to the left and laurels and berries to the right. The rails moulded and carved with a run of Vitruvian scrolls and berries of acanthus, reversing in the middle. All raised on four acanthus-scroll feet. Covered in early to mid-19th century faded green and white lampas silk (NT 609545.9.2, former number ATT/T/023/9/B), made in Lyon, France, incorporating neo-Classical motifs, Neptune and his seahorse chariot; the area beneath the armrest covered in replacement silk, woven in Lyon in 1913 for the 8th Baron Berwick (1877-1947). With seat cushion and bolster cushion.

This opulent and luxurious neo-Classical daybed was acquired by William Noel-Hill, 3rd Baron Berwick (1773-1842), during his diplomatic missions to the courts of Sardinia and Naples between 1808 and 1833. Since at least 1927, the monogram to its arm-rest has been mis-read as ‘CM’ - giving rise to the misapprehension that connected it with Napoleon’s sister, Princess Caroline Murat (1782-1839) - and has only recently been reinterpreted as reading ‘MT’. This, together with the oak leaves and laurels which frame the monogram and stem from the royal arms of the House of Savoy, connects the day-bed to its actual owner, Maria Teresa of Austria-Este, Queen of Sardinia (1773-1832) the wife of Vittorio Emanuele I, Duke of Savoy and King of Sardinia (1759-1824). In light of this discovery, the Trust’s furniture curators have newly researched and written about the daybed, together with the very large group of almost one hundred pieces of North Italian furniture still in situ at Attingham. The daybed is now thought to have been made in Genoa around 1814 for Maria Teresa, perhaps on her and her husband’s return to Turin after ruling in exile in Cagliari, Sardinia between 1802 and 1814. The design for it has not been found, but it was probably conceived by the Swiss-born architect Giocondo Albertolli (1743-1839), who worked on several projects – including remodelling the interiors of the Villa Reale at Monza – for Maria Teresa’s father, Archduke Ferdinand (1754-1806). Moreover, three other pieces of furniture at Attingham with which the daybed is either en suite (NT 608165, an armchair with satyr’s legs) or contemporary (NT 608161, a sofa and NT 608173, another armchair), all incorporate motifs (like acorns and oak leaves, and Vitruvian scrolls) from Albertolli’s designs, woodwork and plasterwork. NT 608165 is closely related to a stool (now in the Castello Sforzesco, Milan) made around 1783 to an Albertolli design published in 1789. When and how William Noel-Hill acquired the daybed is not known. Throughout his time in Italy, he lived in proximity with the Queen first as British envoy and minister plenipotentiary to the court of Sardinia, initially in exile at Cagliari (1808-14) and then at Turin (1814-24). After his diplomatic move to Naples (1824-33), he retained a house in Genoa, where Maria Teresa resided as queen dowager at Palazzo Tursi from 1824 until her death in 1832. He may have acquired the day-bed around 1824, when Maria Teresa moved from Turin to Genoa, but it is possible – given that a bill survives from this period for recovering a daybed in her bedchamber – that she took it with her to furnish her Palazzo. If this is the case, then William Noel-Hill may have acquired it after her death in 1832 and before his return to England – via Genoa – in 1833. It is highly probable that the largest group of Italian furniture at Attingham – the several sets of white and gold stools and chairs, commodes and a serving table (see NT 608150, 608157, 608166, 608168, 608156, 608152 and 608155) some of which were made to the surviving designs of Carlo Randoni (1755-1831) during the refurbishment of the Palazzo Tursi in the 1820s - was acquired by William Noel-Hill in this way. The daybed was first recorded at Attingham in an inventory taken in 1842, when it was listed amongst the contents of the Drawing Room; it was still there (as it is today) in 1861. In both inventories it was described as covered in ‘Crimson and drab Tabouret [a type of striped silk]’ which matched the Drawing Room's red walls and crimson and drab Wilton carpet. At some point between 1861 and 1898 the daybed was re-covered in the early to mid-19th century green and white silk lampas made in Lyon, France (this had been in store at Attingham in 1842) with which it is still covered. The section under the armrest is covered in the replica silk which was woven in Lyon for the 8th Baron Berwick in 1913. Extracted from the article ‘Italian Furniture at Attingham Park’, Furniture History LVI (2020) by Christopher Rowell (Furniture Curator, National Trust) and Dr Wolf Burchard (ex-Furniture Research Curator, National Trust).

Acquired by William Noel-Hill (1773-1842), 3rd Baron Berwick in Italy and brought to Attingham Park in 1833. Probably the 'Reading Lounge cover'd Crimson & drab Tabouret' listed in the Drawing Room at Attingham in inventories taken there in 1842 and 1861. Thence, by descent and bequeathed to the National Trust with the estate, house and contents of Attingham by Thomas Henry Noel-Hill, 8th Baron Berwick (1877-1947) on 15th May 1953.

Armrest: 'MT' monogram, surmounted by a coromet of strawberry leaves